American astrophysicists, who previously stated that they had evidence to prove the existence of primary gravitational waves generated by the Big Bang, now say that they are not certain of their discovery. If their European counterparts prove them wrong, the question of the emergence of gravitational waves at the moment of the Big Bang will be postponed indefinitely. A Russian scientist, who was said to win a Nobel Prize for describing the waves more than 30 years ago, is unlikely to qualify for the Nobel Prize if he is unable to confirm his theory. 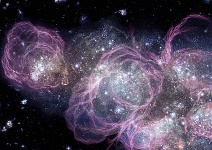 The scientists working in the Antarctic observatory BICEP2, published the results of their research in scientific journal Physical Research Letters. The research was previously called a "sensation". The article notes the existence of blind spots about the object under study. During a public lecture in London, one of the leading physicists of BICEP2 - Clem Pryke, a professor at the University of Minnesota - recognized that circumstances had changed.

In March, the scientists said that they found traces of primary gravitational waves that appeared after the Big Bang 13.8 billion years ago. The news received an extensive coverage in the media and triggered many discussions. For the time being, the theory of the emergence of the universe suggests that the world was created as a result of the Big Bang, which physicists call a "moment of inflation." Immediately after the explosion, the inflationary stage started - the continuous abrupt expansion of the universe. The evidence of the existence of this phase was found in 2006.

Many scientists, including Russian ones, stated that huge gravitational waves appeared during the stage, which allowed the universe to expand. According to the theory, because of gravitational waves, small fluctuations on the level of atoms would turn into a giant disturbances that created galaxies.

American scientists announced in March that they had found traces of gravitational waves on the CMB map. Their alleged discovery was made with the help of BICEP telescope (Background Imaging of Cosmic Extragalactic Polarization), the goal of which is to measure the polarization of the CMB, which also appeared at the time of birth of the universe.

Several months ago, critics of the research said that the change in polarization, which U.S. scientists discovered, could be caused with other reasons, rather than primary gravitational waves. The criticism increased significantly after the publication of the data received from Planck telescope. The new data differed from those of BICEP2. The infrared telescope of the spacecraft, named after the founder of quantum physics, Max Planck, works below the CMB temperature, which allows to obtain unique information about the temperature of radiation itself. The new data are certainly credible, physics believe.

European scientists, who observe the activities of Planck Telescope, promised to disclose more data before the end of 2014. It will then become clear whether the BICEP2 report proves the existence of primary gravitational waves, or the sensation, made in March by American scientists, was, in fact, a hoax.

Earlier, experts suggested that such a discovery would make the researchers of gravitational waves serious contenders for a Nobel Prize. The inflation theory was first voiced in 1979 by young Soviet scientist (currently - a senior researcher at the Institute for Theoretical Physics named after Lev Landau), Alexei Starobinsky. In 1981, Alan Guth of the USA used the term "cosmological inflation", and in 1982, Moscow physicist Andrei Linde proposed his model of a new theory. Last year, Starobinsky received a prestigious Gruber prize.