The UN urban ambient air quality database reveals that half the urban population monitored is exposed to air pollution at least 2.5 times higher than the recommended level and concludes that city dwellers are at risk of "serious, long-term health problems". The survey, covering 91 countries and 1,600 cities, shows that most urban areas show air pollution above acceptable levels. 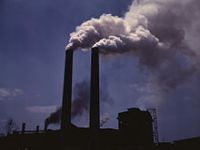 According to the UN's World Health Organization, seven million people died because of air pollution in 2012, which leads the WHO to conclude that air pollution is "the world's largest single environmental health risk", being responsible for one in eight deaths from heart disease, strokes, respiratory infections, chronic pulmonary disease and cancer.

Linked to the deaths is the practice of cooking with biomass, coal, dung or wood stoves, meaning that poorer women and girls are usually those most at risk from breathing in smoke and soot particles in the home. It is estimated that up to 2.9 billion people worldwide use such stoves and that in 2012, 4.3 million people died because of this method of cooking.

There were a further 2.6 million deaths in 2012 caused by outdoor air pollution in rural and urban areas. Most deaths occurred in South-East Asia and the Western Pacific but the database states that "Many of the world's cities are enveloped in dirty air that is dangerous to breathe". Only 12 per cent of city dwellers live in cities where the air quality complies with UN guidelines, while half the urban population monitored is exposed to air pollution at least 2.5 times higher than the recommended level.

More worryingly, data shows that the situation is getting worse. WHO Assistant Director-General for Family, Children and Women's Health, Dr. Flavia Bustreo, states that "Too many urban centres today are so enveloped in dirty air that their skylines are invisible. Not surprisingly, this air is dangerous to breathe. So a growing number of cities and communities worldwide are striving to better meet the needs of their residents - in particular children and the elderly".

For Maria Neira, WHO Director for Public Health, Environmental and Social Determinants of Health, ""We can win the fight against air pollution and reduce the number of people suffering from respiratory and heart disease, as well as lung cancer.

Effective policies and strategies are well understood, but they need to be implemented at sufficient scale. Cities such as Copenhagen and Bogotà, for example, have improved air quality by promoting 'active transport' and prioritizing dedicated networks of urban public transport, walking and cycling."

The onus appears to be on individual initiatives to take action on a local level, adopting strategies tailored for the city in question, such as banning the use of coal, and using or providing incentives for the use of renewable or clean sources of energy, while improving the efficiency of vehicle engines.

The overall cost of these measures would involve a reduction in public spending in the long term, given the corresponding improvement in public health.