Separation of Church and State Disappears with Global Warming

Science has become the new religion of power mongers. The reduction of science to religion deprives rational persons of objective science and imposes religion onto the public through government.

These concerns are relative and could have been argued a century ago. But they increased exponentially over recent decades. It is now impossible to produce objective science, while the values of power mongers are forced onto everyone through science as religion. 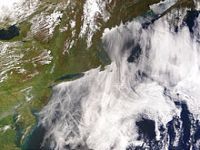 For several years, critics of global warming (called deniers) have been exposing the nature of global warming propaganda as indistinguishable from religion due to an absence of objective reality and imposition of opinions and values. The critics/deniers themselves are seldom scientists, and they are not aware of the extent to which the same has become true throughout science.

Global warming serves as an informative example of the deterioration of science, since this issue has gained public exposure unlike anything else in science. There are other examples which are much more extreme and clear but not evaluated and criticized like global warming. The most extreme example is the "big bang" theory for origins of the material universe. Physicists forgot to account for the amount of time required for the bang to occur and send galaxy-forming matter to the edges of the universe, so they now claim it occurred instantly without laws of physics, which they refer to as "inflation." A similar example which is more obscure is the claim that relativity supersedes Newton's laws in controlling the speed of light and energy dynamics.

Since these subjects are outside the public view, we can use global warming as the example of power mongers transforming science into religion as a means of imposing their values and corruptions onto everyone. There are two elements to the problem. First, there is a total absence of a scientific basis for global warming claims. Secondly, there is nothing but subjective opinions in the claims and impositions of global warming alarmists. These factors are inseparable and dependent upon each other. The fake claims could not be made if there were a true science at the origins of the subject; and the scientific fraud could not be sustained without fakery in the claims covering up the truth.

At the basis of global warming science are fake publications which describe nothing but modeling, which is not science. Fakes claimed to model every element of the atmosphere over the next century or more, while they described nothing for methodology which would allow criticism. The claims in the publications were self-contradictory and in conflict with real science. For example, they claimed to follow the heat produced by carbon dioxide through the atmosphere projected into the future, while they had no starting point for the amount of heat carbon dioxide should produce or a mechanism to explain how the heat is added to the atmosphere. The heat carbon dioxide should produce was the end point rather than the starting point for the modeling.

Climatologists cannot describe a mechanism for carbon dioxide creating global warming. How can they model the result without knowing the mechanism? For awhile, they said the mechanism was near ground level, but it didn't wash, so they switch to an explanation about 9 kilometers up, which is even more ridiculous. If they don't know where it is occurring, they don't know how it is occurring or that it exists.

The essence of the subject could not be skipped over without a substitute purpose. The nature of the arguments shows that the real purpose is to promote a religion of power mongering, not to enhance science. The most visible evidence is the most relied upon argument, which is that 97% of the scientists agree upon the claims. That statement is a religious concern, not a scientific concern. No scientist would degrade his evidence with a claim about consensus. Science is about measured evidence, not the sociology of agreement. There is no concept of agreement in science. Science is published by a small group, sometimes single persons, before any other scientists know it exists. In other words, it is produced without agreement. Supposedly, peer review purifies it, but it to is nothing but more religion-a tool for power mongers to prevent opponents from exposing their frauds.

The origins of the 97% claim is a contrivance diabolically opposed to the purposes of science. The author went through hundreds of published papers on global warming and separated them into two categories-supporting the claim of global warming or opposing it. Scientists never take such a crude position, or any position, in their publications. So the analyst had to make arbitrary decisions in categorizing the publications. Even if there were obvious implications in the position of the researchers, to create a category is a motive in the realm of religion, not science. Science is about evidence, not concensus.

Secondarily, scientists have no choice but to accept the imposed religion or get kicked out of science. This means the image of published science has the purpose of pleasing frauds, while it says nothing about the research. Why then were there 3% of the scientists on the other side? There is no objective method of arriving at the 3% number, it was a propaganda statement. In fact, the number 97% had been around for several years, and the published study did nothing but re-enforce previous claims.

The American Association for the Advancement of Science, which publishes the journal called Science-the most prestigious science journal in the USA, if not the world-decided to stir up public fervor in favor of global warming by producing a publication called "What we Know." Their stated purpose is to reposition the debate away from science and toward social activism and politics. The publication begins thusly: Point 1. Climate Reality, A. Climate scientists agree... Why isn't science the starting point and basis for the subject? They skipped over the science to promote sociology and politics.

No one (with a functional mind) is devoid of a religious state of existence, because all complexities and purposes in their lives create alignments related to attitudes, values and standards. Only strict standards of objectivity prevent those alignments from being imposed upon other persons. Alignment upon unquestionable gods increases with corruption, as demonstrated by the superiority of Arians in Nazism. No one in science is allowed to question the infallibility of Einstein or Plank, while objective reality shows their results to be blatant fraud.

The reason why global warming is religion rather than something else is because it contains nothing but opinions with values and no objective reality. Without objective reality and the rationality which produces it, there is no other method for humans to interact but motives being promoted with inherent attitudes, values and standards. Only objective reality creates an alternative to religion in human interactions.

Attitudes, values and standards are the essence of religion. People have a right to not have someone else's attitudes, values and standards imposed onto them. That result is not easy to achieve. The U.S. Bill of Rights attempted to achieve it by preventing the government from establishing a religion or prohibiting the free expression thereof. Someone imposing their religion is preventing someone else from freely expressing theirs. Resolving this contradiction is not easy. It requires a lot of personal and private freedom. Forcing the global warming religion onto everyone is the opposite.