Elephants turned out to be linguists

Are animals capable of distinguishing between languages ​​of different nations? Recently, zoologists from the UK discovered that they are. So far we can say that only African savanna elephants have outstanding ethno-linguistic abilities and can easily aurally distinguish languages ​​of the Maasai and Kamba people. It is not ruled out that they are not the only smart animals. 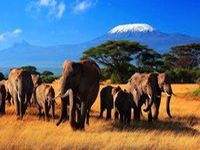 Until recently it was believed that only humans and their next of kin, great apes (e.g., gorillas and chimpanzees, were capable of learning or simply understanding languages spoken by living creatures of a different species. However, two years ago, scientists from France found that dolphins could easily understand languages ​​of other species of "sea primates," and even talk to them (which humans cannot do). New experiments that followed this discovery have shown that the ability to understand "foreign" languages ​​in general is quite widespread in the animal world.

It turned out that some bumble bees are constantly "spying" on the dances of investigator honey bees in order to understand exactly where flowers with lots of pollen and nectar grow. Such spy activity helps insects that fly far worse than honey bees to save time and effort in finding the right plants. Ladybugs understand the language of their enemies, ants, who constantly drive these insects away from their "pets," i.e., aphids. Deciphering the "negotiations" of guards, ladybugs determine how well protected aphids pastures are and what are their chances to get there unnoticed.

The knowledge of a "foreign" language provides a great evolutionary advantage. Those who understand it can be aware of what is happening with their neighbors in the ecosystem, what their plans, intentions and achievements are. Animals that have this information can use it to their advantage. For example, learn about the alleged aggression and prepare defense like African savanna elephants (Loxodonta africana).

These living beings, the largest land animals on the planet, did not have natural enemies before humans. However, people began to pose a serious risk for these giants only when firearms started being used. Before that hunting elephants was quite rare. In addition to direct destruction of savanna elephants, humans at some point began competing with them for the ecological niche, because these voracious giants inflicted damage to animal husbandry and farming. No wonder that at some point people began using preventive measures against these "aggressors," driving them away from their settlements.

It would seem that elephants would be alerted by human speech they hear, but the study group of zoologists from the University of Sussex (UK) directed by Professor Karin McComb showed that this was not the case. While working in Amboseli National Park (Kenya), researchers conducted an interesting experiment. They recorded on tape the phrase "Look over there, here are a few elephants," and then played it to several herds of elephants consisting of adult females with babies. In one case, this phrase was uttered in the language of the Maasai, semi-nomadic livestock farmers who often kill elephants in the fight for water and pasture and who the animals are afraid of. In another case, a similar phrase was uttered in the language of Kamba, settled farmers who rarely conflicted with elephants.

As a result, it was found that when the elephants heard this phrase in the language of the Maasai, they immediately were alarmed and huddled in a tight bunch, showing the typical behavior of these giants to repel possible aggression. When they heard Kamba, elephants listened to it for a few minutes, and then continued to graze quietly without showing any particular signs of anxious behavior. After processing the results of the observations, scientists have found that anxiety caused by the speech of the Maasai increased twice as much compared to when they heard Kamba. Furthermore, as it turned out, the elephants not only distinguished one language from another, but could also distinguish the speakers.

The latter discovery was based on a series of other experiments. The scientists recorded the phrase pronounced by women, children, the elderly and mature men of the Maasai people, and then had the elephants listen to it. When the animals heard the voices of children, women or elderly, they displayed anxiety, but did not gather in a group. This is understandable, as the animals are accustomed to the fact that women, children and elderly Maasai do not cause them much trouble. Alertness, apparently, was caused by to the fact that the elephants on the basis of previous experience suggested that grown men-hunters could be nearby.

The zoologists also found that the reaction of the herd to the phrase spoken in the language of the Maasai depended on the life experiences of their leader. If the leader of the herd was a female older than 42, the elephants were not worried when they heard the voices of women or children. If the group was headed by a young female, 40 percent of the elephants began to worry when they heard children or females. The scientists suggested that this situation was due to the cultural memory of the animals. These days the Maasai are rarely hunting elephants, so the animals simply do not know who to beware, that is, they do not have sufficient "negative" experience.

Summing up the results of their work, scientists have made an interesting suggestion. It is not ruled out that the elephants, hearing the speech of the "dangerous" humans nearby, warn their neighbors about their appearance. The scientists made this conclusion based on the fact that after the elephants hear the Maasai people, they make loud sounds. The zoologists recorded and analyzed these sounds, and discovered that these signals are quite different from other warning "alerts," for example, those emitted by elephants when they discover bees nearby or signals made to warn about a fire in the savanna.

It seems that elephants are really able to distinguish one human language from another. It is interesting that they developed this ability relatively recently, less than a thousand years ago, when Bantu languages ​​(including Kamba) finally separated from the languages ​​of Eastern Nilotic groups (including Maasai). In reality, however, it must have happened much later, about 500 years ago, when the Maasai who rarely hunted elephants, came from the upper reaches of the Nile to the land of Kenya and started active destruction of these animals. Half a century is a very short time for the emergence of a consistent pattern of behavior of animals that do not live in human settlements.

Therefore, it is possible that elephants were not the only ones to have learned to distinguish various languages in such a short time. Perhaps, other animals, including those living at the Russian expanses, are able to determine who is currently close to them, an innocent tourist from Western Europe or a local resident who rarely goes out without a gun. Perhaps, it can explain frequent paradoxical cases occurring lately when on the same day, elk, wild boar and other inhabitants of Russian forests calmly responded to the approaching eco-tourists, but immediately hid in the woods with the appearance of hunters.