The Flood is waiting in the wings

Over a thousand years have passed from the time of the Flood, according to the Old Testament, the Book of Genesis. Legend has it that through the will of God all the people were cut off from the face of the earth, except the pious Noah and his family. The chosen found salvation in the Noah's Ark, where the Almighty asked them to take a pair of each animal species. All life was wiped off the face of the earth, leaving no stone unturned, except the blessed Ark. According to scientists at the University of Innsbruck and the Potsdam Institute for Climate Impact Research, a new global catastrophe is coming. Fortunately, it will not be as global in nature compared to the Old Testament Flood. 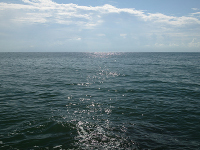 German and Austrian scientists in the recent years have been extremely concerned with the problems of global warming. Ben Marzeion of the University of Innsbruck and Anders Levermann of the Potsdam Institute for Climate Impact Research drew attention to the rising sea levels in the long term. The scientists considered various scenarios of the rise in average temperature of the Earth caused by human activity

The researchers came to a disappointing conclusion. In the next two millennia, one fifth of the cultural and mixed heritage would be endangered if the temperature raises at least 3 ° C above pre-industrial levels. This includes the monuments of the central part of St. Petersburg, Venice, Naples, Istanbul, London Tower, the Statue of Liberty, Sydney Opera House and many others. If nature is unkind to mankind, it is likely that the water will cover 1.1 percent of the land. 12 countries around the world are at risk of losing half of their territories. A huge portion of the world population and a considerable amount of cultural world heritage sites are concentrated along the coast. Today, about seven percent of the world population lives on the coastal lands.

Ben Marzeion said that mankind must take a fundamental decision to either not worry about the fate of cultural heritage, rejoicing that for several centuries we will still be able to save something dear to peoples and nations, or start taking steps to conserve it for future generations. Nearly 20 percent of the World Heritage sites currently included in the UNESCO list, and about seven percent of settlement along the coast are currently at risk of being affected by sea-level rise at even modest-looking three degrees of global warming, said Marzeion. This illustrates the magnitude of the problem that we are shifting to the future generations. Usually when people talk about climate change and the economic and environmental consequences they count how much financial investment it would require. We want to draw attention to the cultural significance, Levermann said. The temperature has already risen by 0.8 degrees compared to pre-industrial levels, and 40 sites are still at risk. Scientists believe that even if the current temperature managed to stay at the same level over the next two millennia, approximately six percent of the World Heritage cultural sites would be affected by sea-level rise, along with 0.7 percent of the global land area.

Unlike categorically minded Western counterparts, Russian experts are in no hurry to make plans for two thousand years ahead. Scientists believe that such long-term projections are of little interest to the public and researchers. The best option is the next century during which scientists project that global sea level could rise by an average of 0.5 to 1 meter. Territories with no security system of their own will be threatened. Saint Petersburg, fortunately, is not in danger because the city is protected by a secure dam. The authors of the research did not consider the impact of other possible factors of climate change in their studies, in particular, increase in the intensity and severity of extreme weather events.

According to the scientists, in the next couple of thousand years, despite the global cataclysms, we can live a relatively comfortable life. The Flood is not expected, but the residents of the coastal countries should think about moving or building the ark for self-preservation to be on the safe side, and cultural organizations should think about ways to preserve heritage for future generations.
Yulia Koroleva