The origin of the famous Tunguska meteorite is still fiercely debated. If, however, we suggest that this was a meteorite and not a spaceship, for example, then where did it come from? Until recently, most experts denied that it could have come from Mars. Today, however, this theory has standing. 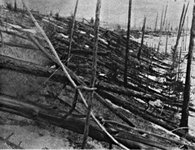 Last spring, at the State Geological Museum named after Vernadsky at the Russian Academy of Sciences Andrei Zlobin made ​​a statement that he investigated the alleged fragments of the cosmic body that fell in the summer of 1908 over the Siberian taiga near the Stony Tunguska. Three hypothetical meteorite fragments were found about a quarter of a century ago at the river bed near the area of fall. Chemical analysis showed the presence of vitreous cortex and quartz that are generally extremely rare in meteorites.

Until the fall of a large meteorite in the Chelyabinsk region near Lake Chebarkul in February of last year, most experts preferred the comet theory of the Tunguska explosion. It was supported by the absence of debris that could be convincingly attributed to the long-time event in the Tunguska. Recently, however, scientists have concluded that in the event of a meteorite presence of a crater and fragments is not a mandatory phenomenon. After that the meteor version once again became one of the "leading" ones in an attempt to explain the phenomenon of the Tunguska explosion.

Experts looked for analogs. In particular, the scientific group of Yana Anfinogenova of Tomsk State University studied the so-called John's Stone, a mysterious chip found in 1972 in a valley near Mount Stojkovic, the epicenter of the Tunguska explosion, named after its discoverer, scientist John Anfinogenov. In composition the stone was significantly different from other species present in the same area.

In terms of chemical composition it is very similar to the fragments studied by Andrei Zlobin. The study revealed that John's Stone consisted mainly of sandstone grain about 0.5-1.5 cm in size. In terms of structure it resembles the samples that have been found recently on Mars. Earlier it was believed that there was no quartz on the Red Planet. When Zlobin announced the results of his research, Natalia Artemyeva with the Institute of Dynamics of Geospheres stated that "vitreous cortex or quartz did not exist in meteorites."

Nevertheless, the rovers' data confirm the presence of at least traces of quartz on the Red Planet. Although Tunguska fragments are still very different in composition from the known Martian meteorites, there is no reason to completely dismiss this hypothesis of origin. Obviously, if there is quartz on Mars, Earth's nearest neighbor, then meteorites where it is present may get to Earth. This cannot be ruled out.

Unfortunately, Mrs. Anfinogenova and her colleagues did not analyze the isotopic composition of John's Stone. Had the examination revealed an atypical ratio of argon isotopes, it would clarify the situation. Due to low gravity, lighter isotopes of this gas are virtually absent in the Martian atmosphere. Thy do exist in the Earth's atmosphere.

The study of Anfinogenova's team raises as many questions as Zlobin's study does. From a fairly large number of meteorites of Martian origin present on Earth, there is not a single one coinciding with the composition of John's Stone.

Surprisingly, three-quarters of Martian meteorites are composed of rocks that are almost never found on the Red Planet. They are much younger than the most common elements of the Martian surface. Since the area of ​​Mars is small, much smaller than that of the Earth, it is not clear where on the planet such young rocks should be sought.

On the one hand, we cannot dismiss the theory of the Martian origin of the Tunguska meteorite, but on the other hand, there is no evidence to prove it yet. Perhaps later there will be new studies that would shed light on this mystery.