Just as it becomes evident that the Fukushima nuclear energy plant is spewing massive amounts of radiation into the Pacific Ocean raising serious doubts about public health from Alaska to New Zealand, the mysterious death of hundreds of dolphins off the USA's East Coast indicates that all may not be well in the Atlantic. 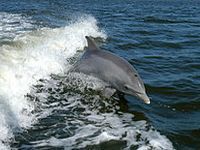 The cause of the hundreds of mysterious dolphin deaths off the East coast of the United States of America in recent weeks has been the subject of a major investigation since the beginning of August. To date, the conclusions are becoming startlingly ominous: while these deaths may be the result of a virus, there are indications that they are a telling sign that the Ocean has become polluted to a level where it is starting not to be able to sustain top-feeder life.

The incidence is so severe that the US National Oceanic and Atmospheric Administration has issued an Unusual Mortality Event alert as seven times the normal number of dolphin carcasses are washed ashore. In Virginia, of the 164 dolphins found dead on its beaches, 78 cases have appeared in August. That makes a total of 228 dolphin deaths so far in January to August 2013, compared with 111 cases in 2012.

Speculation into what has happened has centred on a virus - morbillivirus, which caused hundreds of dolphin deaths (to be exact, 740) back in 1987 - long enough ago for this new generation of dolphins not to have had any contact with it and so not being able to build antibodies. However, the autopsies reveal multi-organ system failure in these animals.

Could this be due to suppressed immune systems already overloaded with a toxic environment in which the dolphins swim? The dolphins in question are mainly bottlenose dolphins, which are top-feeders, a higher order predator eating other smaller marine animals, so in a way what happens to the bottlenose is a mirror image of what is happening below the waters.

What is particularly alarming is the high incidence of adult males and calves. The female can get rid of contaminants in her system through lactation, when the milk is passed to the calf. The male cannot do so, and there is a very high degree of contaminants present in many of the calves examined, a level described by some experts as "outrageous".

The conclusions will be made in the laboratories but how long will it be before the signs are more than signals, and become irreversible symptoms that we have managed to destroy our habitat and that of our partners on this planet?