Spanish scientists have determined which celestial body could be the "parent" of the meteorite that caused so much trouble to the residents of Chelyabinsk, Russia, last winter. They believe that the meteorite has likely split from asteroids 2007 and 2011 BD7 EO40 from the Apollo group. The latter is a more likely candidate for the role of the "parent". 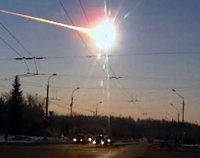 The famous Chelyabinsk meteorite that fell from the sky on February 15 of this year made a lot of noise (both literally and figuratively), but the mystery of its origin remains unsolved. Although scientists have determined the chemical composition of the meteorite, so far no assumptions of its origin have been made. According to the preliminary data of this analysis, it is safe to say that the "parent" of the meteorite is an asteroid from the Apollo group. The situation is further complicated by the fact that before the meteorite entered into the atmosphere, no one has seen it, and therefore, the trajectory of the flight is still not precisely defined.

It would be good to know where this meteorite came from, at least in order to understand whether we should await other "visitors" from this region of space. Two Spanish scientists, Dr. Carlos de la Fuente Marcos and his brother Raul with the Complutense University of Madrid (Spain) decided to find out which of the celestial bodies was the "parent" of the meteorite. They conducted a lengthy analysis of the possible trajectories of the Chelyabinsk meteorite and created a series of computer simulations to test the connection of different asteroid groups and this meteorite. As a result, the researchers concluded that the meteorite could have been separated from asteroid 2007 and 2011 BD7 EO40 from the Apollo group.

The Apollo asteroids are near-Earth asteroids whose orbits cross the orbit of the Earth from the outside. While formally their orbits are beyond that of the Earth, they continue to cross it in the area of aphelion (the point of orbit farthest from the Sun) of our planet. Most of the Apollo asteroids are located between the orbits of Venus and Jupiter, but there are exceptions. Asteroid 2005 HC4 approaches the Sun five times closer than Mercury, up to a distance of 0.071 AU, while another asteroid, 1999 XS35, on the contrary, is at a distance much beyond the orbit of Neptune, that is, 35.2 astronomical units.

As for the two candidates for the "parents" of the Chelyabinsk meteorite, there is information that in addition to regular encounters with the Earth - Moon system, they also pass close to Venus, Mars, and Ceres. It is assumed that both of these asteroids are relatively young (in space standards, of course). Their age is only some 20-40 thousand years. This is evidenced by rather complex orbits of these celestial bodies.

The most likely candidate for the role of the "parent" of the Chelyabinsk meteorite is believed to be asteroid 2011 EO40. According to Dr. de la Fuente Marcos, it is a large, fragile heap of rocks. This means that at times they can be separated from the body, like the Chelyabinsk meteorite. To test this hypothesis, researchers conducted a computer simulation of a possible disintegration of the asteroid body. The results showed that this degradation is possible under the influence of gravity of the objects that 2011 EO40 approaches from time to time. Interestingly, in a number of computer experiments pieces separated from this celestial body reached the Earth's atmosphere.

The authors believe that further monitoring will show whether their calculations are correct, as well as whether or not the meteorite is a piece of 2011 EO40. In order to figure that out they suggest analyzing the composition of the asteroid in terms of reflected light, and compare it with the composition of the meteoroid fragments of the Chelyabinsk meteorite. However, the researchers point out that the only way to be sure whether the two objects are related is to send a space probe to the asteroid to obtain its material. However, Mr. de la Fuente Marcos believes that it is unlikely to happen in the near future due to a high cost of the project.

Is it possible that in the near future 2011 EO40 will send another "messenger" to our planet? Astrophysicist Jorge Zuluaga with Antioch University (Colombia) said that this is quite possible, although there are no particular reasons to fear this celestial body. The researcher said that the asteroid is no more dangerous than others from the list of minor planets. He explained that there are plenty of asteroids with complex orbits prone to perturbations due to encounters with celestial bodies and the potential to break into a group of dangerous meteoroids. This means that hypothetically, there are plenty of meteorites similar to the Chelyabinsk one around the Earth.