India is actively developing its space industry. Indian weather satellite INSAT-3D and telecommunications satellite Alfasat were recently launched.  India was named a possible competitor for the Russian Federation in this area. However, it was Russia that marked the beginning of space development in India some time ago. Vladimir Gubarev, a journalist and writer, told his space story: 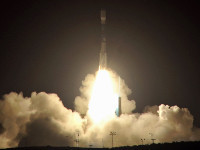 "A long time ago, in 1972, I was the first journalist who traveled through the Indian space industry that at the time was at its infancy. I watched the birth of the first Indian satellite Aryabhata. At the time the cooperation with Russia was at its initial stage. What struck me was the new research centers, especially in the beautiful city of Bangalore. They set up a satellites center headed by a young scientist and researcher Dr. Rao who later led India's space program.

At the time I was very interested in India and was reading a very interesting book by Jawaharlal Nehru, "Discovery of India". He called India's steel mills and factories built with the help of the Soviet Union the temples of new India. I called Aryabhata satellite the first space temple of India. Within a year, I traveled to all the Scientific and Research Institutes of India. My book was published four days after the launch of the satellite Aryabhata. The satellite, incidentally, was launched with a Russian missile from the Kapustin Yar cosmodrome.

Sometime later, I received a letter from the Indian Prime Minister Indira Gandhi. In the letter, she asked for permission to translate my book to all the Indian languages. I answered that I agreed and that this was my gift to India. The book was published by several publishers. This was India's first step to space.

Then over the years I have always participated in the launching of "Bhaskar," the second Indian satellite. It was very interesting to see how these events evolved. When the first Indian cosmonaut flew into space (launched by USSR), a trip to India of a small group was organized. I was part of this group, and we set off to India. It was a great trip, Indira Gandhi gave us her plane. Georgy Grechko, a Russian cosmonaut, traveled with us. I was the only one in the group with a great experience in India, so I told Grechko, "Georgy, at any time before any meal you have to a take a sip of whiskey. This is the only way to avoid catching some nasty thing." There was a lot of nasty stuff in India. We drove across the country, and, as it later turned out, we were the only two who did not catch some infection.

Indira Gandhi arranged a great reception in honor of our delegation. Three or four months later Indira Gandhi was killed.  After a while I went back to India and met Rajiv Gandhi, who later also died ... tragic story.

But back to space. One thing struck me the most. India's first satellite was created in Bangalore. It is a city in the south of the country, and Svetoslav Roerich lived nearby. We came to visit him, I was then the deputy chief editor of Komsomolskaya Pravda, and we agreed to arrange an exhibition of Roerich's paintings in Moscow for the first time. Satellite parts were delivered there, in Bangalore, created in the Russian center of Dnepropetrovsk satellites headed by Vyacheslav Kovtunenko. The parts and test stations were delivered on a large plane. Russia provided significant help to India in the first phase of space exploration. From India, the same plane delivered an exhibition of many paintings of Svetoslav Roerich to Moscow. This is how the first exhibition of Roerich was organized in Moscow, and I was happy to take part in it.

This was the beginning of the space development in India. There was another magical spectacle. I was the first journalist of the USSR who went to Sriharikota launch site. The small island was connected with a road across the shallow bay. On both sides of it there were millions of flamingos. This was a spectacular view, fantastic birds, incredible beauty. When we arrived to the ocean shore, we wanted to go swimming so bad, but our group attendant said, "You cannot do this, take a look". We looked at the water and saw shark fins. On the shore there were cobras crawling. Very exotic. This is where the launch site was located. This was the site of the first launch of Indian missiles. This is one of the most beautiful memories.

Frankly, I am glad that India is striding to space by leaps and bounds and becoming one of the leading space powers. This is natural, because it is very beautiful, amazing, magnificent country with wonderful people. This is a great thing - the Indian industry built with the help of the Soviet Union that greatly helped India. Now a great cosmic temple of India is being built."