Where Did the Martian Rivers Go?

The hypothesis that Mars once had water bodies finds increasingly more evidence. Traces of glaciers and river beds were found on the Red Planet. But if there were rivers there, where did they flow? Employees of California Institute of Technology (USA), headed by Roman Dibiase attempted to answer this question. 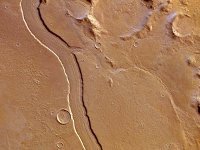 Back in 2006, MARSIS radar revealed vast accumulation of water ice beneath the surface of the planet, and not only at the poles. In particular, there is an ice-filled crater with a diameter of about 250 kilometers under the Plain of Chryse. A year earlier experts from Germany found on the slopes of a Martian canyon located in the region of Melas Chasma tracks similar to riverbed cannels. At the bottom on the riverbed they found sulfate compounds usually formed as a result of oxidation by water. This led to the conclusion that there was once a vast sea in the area.

Scientists believe that over a certain period water on Mars existed not only in frozen, but also liquid state. Volcanoes melted ice beneath the surface, and the water flowed out. After a while it began to evaporate, as evidenced by the discovery of sulfates on the planet.

Last year, Curiosity Rover transferred pictures obtained by telemetry that show something resembling a gravel strewn bed of the river or stream on Mars. The photos were taken in the area of ​​Gale Crater with clearly visible deep layers of the Martian soil that can tell us about the geological history of the Red Planet. The discovered riverbed is located between a field to the north of the crater and a mountain. According to experts, the size and shape of the riverbed stones can shed some light on the length of the river and the current speed of its water.

According to most scientists, the water on the Red Planet is still present. However, it is not clear why there are so few phyllosilicates, minerals rocks that usually form the bottom of water bodies, in the lowlands of the northern hemisphere compared to the south.

Recently scientists were able to clarify this issue. Construction of the climatic and geochemical models of Mars has shown that, if there was an ocean on the planet, its surface was partially covered with ice. In addition, the details of the relief at the edges of the proposed ocean basin correspond to the presence of ​​large glaciers in the area. The researchers believe that it is low temperature and ice cover that prevented the formation of layered silicates on the bottom of the reservoir typical of marine sediments.

All these facts indicate that the previously constructed models of the formation of the Martian climate did not accurately reflect the real picture. While some models of ancient Mars present it as dry and cold, and others - warm and humid, in fact, the planet's climate most likely was wet and very cold, close to the circumpolar on Earth. This is consistent with all the newly discovered geological features.

At this time, researchers are interested in the region called Aeolian ridge, which is a plain located on the border between the northern lowlands and southern highlands. It is covered by a number of mountain ranges that scientists interpret as ancient river beds.

These formations are raised above the surrounding terrain, and not sunk, as it usually happens with the beds of water bodies, because coarse sand and gravel in them are more resistant to erosion.

Dibiase and his colleagues studied the area from the images taken by HiRISE spacecraft Mars Reconnaissance Orbiter. Due to the very high resolution, the device can see objects as small as 25 centimeters. Also, some places were purposefully photographed at a slight offset in order to obtain three-dimensional images.

As it turned out, the cannels of the Martian rivers gradually expand, and then run down steeply, forming a delta with sedimentary deposits typical of the confluence of the rivers into lakes, seas or oceans.

Formations similar to the delta were previously discovered on Mars, but they all lie within distinct topographical boundaries - for example, impact craters. This time the delta leads to an open area. This may be another indication that the planet was once covered with the ocean.
Irina Shlionskaya