Global warming? Trees to the rescue! 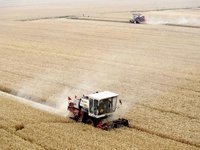 Americans are all too familiar with environmental activists' gloomy projections of global crises, including the assertion that mankind's gaseous carbon dioxide emissions will inevitably send the planet into an irreversible greenhouse sweat box. Belief in evolution largely underpins the common view of a fragile planet. There is an idea that God-designed systems maintain healthy levels of atmospheric gases required for life. So how should the news that the world's forests are greening because of increased carbon dioxide be interpreted?

Forest scientists have been watching a pleasant trend, even amidst unpleasant environmentalist diatribes-the world's forests are expanding, even in arid regions. The trees are growing without any extra water. All they needed was more carbon dioxide.

A recent collaboration of scientists analyzed carbon dioxide data taken from decades-old monitoring stations. They found that forests "have become dramatically more efficient in how they use water," according to Harvard news. And the key to that efficiency was an uptick in atmospheric carbon dioxide. Plants simply find it easier to extract carbon dioxide from air that has more of it-which they then use for more efficient photosynthesis.

Though he was quick to say that the biosphere's future might still collapse, Trevor Keenan, lead author of the paper published in Nature, told Harvard news, "This could be considered a beneficial effect of increased atmospheric carbon dioxide."

Keenan also said, "What's surprising is we didn't expect the effect to be this big. A large proportion of the ecosystems in the world are limited by water-they don't have enough water during the year to reach their maximum potential growth. If they become more efficient at using water, they should be able to take more carbon out of the atmosphere due to higher growth rates."

So, in effect, the world's forests are helping sequester excess carbon dioxide, all without any human intervention.

And it appears that the warming trend itself proceeded primarily without human intervention, too. A decrease in the rate of warming within the last fifteen years has surprised many climate scientists. Although still in the minority, a growing number of them link weather trends to solar activity. The upcoming 5th Assessment Report of the Intergovernmental Panel on Climate Change (IPCC) is expected to address this "hot" topic. The failure of climate models to anticipate this decrease in the rate of warming may have resulted from a failure to link solar activity with warming.

Trees have been indispensable throughout history for the ways they have directly benefitted human and animal life. This news of a greening planet brings yet another reason to thank God for trees. Forests help balance levels of atmospheric gases integral to living things.