This week's edition of Nature magazine establishes a link between energy production and large-scale earthquakes in the USA. The causes? Methods to extract natural gas, production of geothermal energy and the injection of fluids underground. The proof? Numerous earthquakes which have already occurred in the United States of America. 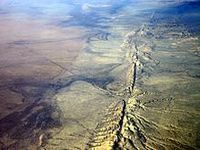 Is the energy lobby placing our lives at risk? According to the latest research, a series of three articles published in Science magazine and appraised in Nature*,  it would appear so. The article referenced below claims that when fluids are injected into wells, they lubricate fault lines and can increase slippage. This means that large-scale tremors elsewhere, such as Chile, can cause earthquakes at well-injection sites in the USA.

To blame, according to the research, are methods to extract natural gas, production of geothermal energy and the injection of fluids underground. The evidence backing these claims is considerable.

The first paper, analysed in the study, is by US seismologist William Ellsworth (Geological Survey, Menlo Park, California), who points out that the number of earthquakes hitting the central and eastern states in the USA is skyrocketing when compared with the past. Between 1967 and 2000, there was an average of 21 quakes at magnitude 3.0 or higher. In 2011, the figure was a staggering 188.

A second study, by seismologist Nicholas van der Elst (Lamont-Docherty Earth Laboratory, Palisades, New York), indicated that at least 50 per cent of the 4.5 or higher magnitude earthquakes striking the USA have occurred near injection-well sites.

For van der Elst, the fluid pore pressure in underground rock deposits is enhanced by the practice of increased activity in natural gas wells - the injection of liquids lubricated existing faults, making them more prone to rupturing.

For this seismologist, the culprit is not fracking itself (hydraulic fracturing), in which fluids under high pressure are  used to fracture rocks, releasing trapped natural gas, but rather, the reinjection of waste water from the process into adjacent rock.

A third study by earthquake physicist Emily Brodsky (University of California, Santa Cruz), shows that the rate of water loss at the San Andreas fault, where geo-thermal energy is produced by injecting water into the fault, has a correlation with the incidence of earthquakes.

In their quest to provide cheap energy, are our illustrious scientists placing our lives at risk? The experts would agree that this is a distinct probability.