The very name of black holes suggests an idea about monsters sucking in the material environment in its insatiable massive womb. Recently, however, scientists found that these objects do not only continually absorb cosmic dust, but also push a part of the cool dust cloud away, along the axial direction of the black hole. 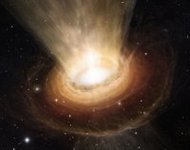 The nature of supermassive black holes at the centers of galaxies is still mysterious. The matter disappearing into black holes glows in the high-frequency electromagnetic waves. But now it is not the only source of information about black holes. Observations in the infrared range were amazingly interesting and expanded the knowledge about the distribution of material particles in the vicinity of these objects. Not only do they continually absorb cosmic dust, but also push away the cool part of the dust cloud along the axial direction of the black hole, as evidenced by recent observational experiments.

The very name of black holes suggests an idea about monsters sucking in the material environment in its insatiable massive womb. The rotation of the matter in the accretion disk of a black hole generates glow in X-rays that help to find black holes. The customary image of a space "vacuum cleaner" was destroyed in ground-based observations of one of the best modern tools, The Very Large Telescope.

The Very Large Telescope that belongs to the European Southern Observatory accumulated data on the properties of the dust matter in the vicinity of the black hole and in the center of an active galaxy. It turned out that not all of the matter accumulates in the torus around the black hole. Its significant part was found in the cone-shaped extensions around the axis of the black hole, i.e., its polar regions. In recent decades, the cosmology had an idea that the centers of many galaxies have black holes, supermassive objects that continue to increase their mass by absorbing dust or any other substance of the galactic core.

The most powerful manifestations are in the centers of active galactic nuclei (AGNs), they manifest intense flows of electromagnetic radiation in a wide range. Dusty torus forms around AGNs according to the same simple mechanical principles that form the foam surrounding a whirlpool. Monstrously huge cloud formations in the form of a donut surround and hide what is happening in the active galactic nucleus. New observations in AGNs (NGC 3783) showed that the picture is much more complex than a traditional donut radiating heat.

The data obtained by The Very Large Telescope confidently and with sufficient accuracy registered not only the configuration of the torus heated to 700-1000 ° C, but also two large containers of dust above and below the torus axis of the black hole that is much cooler (their radiation was still registered in the infrared range). These containers move away from the black hole along the axial direction. Theorists will have to identify and model the mechanism of the expulsion of the cool dust.

Sebastian Hönig with the University of California, Santa Barbara (USA), the lead author of the work in question, said about the observations: "For the first time we were able to combine detailed observations in the mid-infrared range, indicating relatively cold dust at room temperature, and very detailed observations of hot dust around the same active galactic nuclei."

The importance of the experimental results is in the fact that they are changing the ideas about the organization of the environment transformation process around black holes. High quality observations do allow underestimating them. These specific observations will be undoubtedly followed by theoretical developments. Unexpected and accurate experimental data is a powerful incentive to improve theoretical concepts.

The picture of the "cold wind" moving away over the poles of absorbing matter obtained from the observations finds its first interpretation. One of them is that to the extent that a supermassive black hole heats the dust cloud in the form of a torus, the radiation generated by it casts light on far away dust particles that assemble in relatively cold streams - the cool breeze registered by The Very Large Telescope.

Many mysterious details of the mechanism remain unclear. The most common question is what makes two radically different processes (absorption and expulsion of dust) run concurrently? Why is the dust torus around the AGN not exhausted? What is the dynamics of these regions over time? These and many other questions will be answered in the future because the study of AGN and black holes started only in the twentieth century.