Of all places to find a new species of bird, the Cambodian capital city Phnom Penh is the venue for the discovery of what is known a new species of lowland tailorbird. Welcome to Earth, Orthotomus chaktomuk. In a baptism of fire, experts are insisting it be listed as "near threatened". 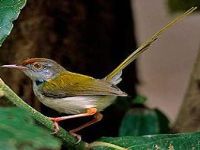 Orthotomus chaktomuk is a completely new species of bird, undescribed, and lives slap in the middle of a capital city - Cambodia's Phnom Penh, an occurrence which is described as extremely rare, according to conservation societies. The Oriental Bird Club journal, Forktail, has confirmed the find, a species of warbler, belonging to the group of birds that weave intricate nests from leaves, living in dense scrubland in the floodplain of the River Mekong.

Due to the extremely small area of its shrinking habitat, experts from the Wildlife Conservation Society are recommending that the new species be entered as "near threatened" in the Red List of the International Union for the Conservation of Nature.

The study co-author, Simon Mahood, considers that it is "extraordinary" to confirm the existence of a completely new species in such an urban centre: "The modern discovery of an un-described bird species within the limits of a large populous city - not to mention 30 minutes from my home - is extraordinary. The discovery indicates that new species of birds may still be found in familiar and unexpected locations," he stated.

The study confirmed the existence of the new species based upon "distinctive morphological and vocal characters" placing its habitat in an area between the Rivers Mekong, Tonle Sap and Bassac of Cambodia. The new bird is closely related to Orthotomus atrogularis, with genetic differences which, according to the study, "are apparently of a level usually associated with subspecies. However the two taxa behave as biological species, existing locally in sympatry and even exceptionally in syntopy, without apparent hybridization".

The habitat, "declining in area and quality", is extremely concentrated, most of the birds being limited to "one large contiguous area of habitat in the Tonle Sap floodplain". For this reason, the study's authors "recommend it is classified as Near Threatened on the IUCN Red List".

Welcome to our planet. You'll soon be extinct.