Think the Lisbon earthquake of 1755 was catastrophic? You haven't seen anything yet. A new anomaly of the behavior of the Earth's crust has been detected off the coast of Portugal. Is this the start of a new phase of the Wilson Cycle, where the movement of plates breaks up and creates continents? Experts predict the disappearance of the Atlantic Ocean. 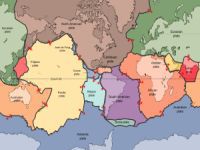 The process has been identified by scientists from Monash University led by Dr. João Duarte from the School of Geosciences. His team mapped the Ocean floor around the passive margin (apparently) at the Southwest Iberia margin (SIM). Here they found that the Gibraltar Arc and the SIM appear to be connected and found stresses from the Gibraltar Arc related to the Africa-Eurasia convergence.

The scientists predict that this has the potential to form a new eastern Atlantic subduction system, bringing Europe and America together, slamming Iberia into the United States of America, meaning that the Atlantic Ocean will disappear. The report, published in Geology, predicts that the process will take around 220 million years.

According to Dr. Duarte, the 1755 earthquake and sobsequent tsunami, which destroyed the Portuguese capital, Lisbon, in 1755, was a part of this process, as would have been another serious quake in Lisbon in 1969. If the tectonic plate is moving, as it has now been proved to be the case, how many more earthquakes will appear on either side of the Atlantic, and when?