Brazilian astronomers made a sensational discovery. On the far side of the galaxy they found a star with characteristics resembling those of the Sun. This star is located 240 light-years away from the Earth. Interestingly, the observed star is two million years older than the Sun, and its observation will help scientists to study the evolution of the Sun. 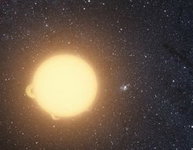 The study was conducted using a space satellite CoRot and Japanese telescope "Subaru", measuring 8.2 meters, located on Mauna Kea (Hawaii) at an altitude of 4,100 meters above sea level. It is owned by the National Astronomical Observatory of Japan and has been operating since 1999. In 2005, the Subaru telescope was equipped with a huge monolithic mirror lens, the largest in the world. Recently, scientists studied the dust disk around the star called HR 4796 A.

It is a neighboring young star of approximately 8-10 million years old. It is located only 240 light-years away from the Earth. The study of the galaxy is not yet completed, and according to a report of a news agency, a sensational discovery of the Sun's "twin" was made.

According to a project leader, specialist of the Institute of Astronomy, Geophysics and Atmospheric Research of the University of Sao Paulo Jorge Melendis, the main importance of the discovery is that the observed star twin is 2 million years older than the Sun, and it would help to shed light at the evolution of the Sun. Using computer models of stellar evolution, scientists estimated the age of the Sun to be approximately 4.57 billion years. This means that its older brother named "CoRot Sol 1" in honor of one of its discoverers, scientific satellite Co-Roth, has an approximate age of 4 billion 572 million years.

As it turned out, the new star is removed from Earth by a little over 200 light-years, and each light year is equivalent to about 9.46 trillion kilometers, while its "little brother" the Sun is only 26 thousand light years away from the center of the Milky Way and rotates around it, making a full turn in over 200 million years. Researchers are particularly interested in the "older Sun" because of the so-called extra-solar planet, i.e., a planet located outside of the solar system, discovered in 1996.

If it is found to be inhabited, the life on it may be much older than that on Earth. Such planets were first discovered indirectly in the 1990s because of slight "swinging" of the stars around which they were turning. However, this is not the only extra-solar planet. By late May of 2013 the existence of 889 extra-solar planets was confirmed in 694 planetary systems, of which 133 have more than one planet.

The astronomers believe that observations of the distant luminary will help scientists to predict the future of the Sun with higher accuracy. According to the researchers, life on Earth may disappear in 1.1 billion years. Scientists believe that over billions of years the brightness of the Sun may be increasing, and the star, turning into a red giant, will swallow Mercury and Venus.

Red stars are the stars where burning of hydrogen has stopped. When a luminary turns into this type of a star, its surface temperature begins to rise. The star increases in size, which inevitably leads to the death of the planets located in the orbit closest to the star. Because of very high temperature, life on our planet would be simply impossible, and humanity will perish.

There is also a theory that the Apocalypse is inevitable, and would happen because the Sun would slowly pull our planet closer. This is the conclusion reached by scientists from Poland, the U.S., and Spain who studied the Sun. According to the phenomenon called Poynting-Robertson effect, all celestial bodies, and not only our planet, are spiraling and falling towards the sun. The smaller the object, the faster it is moving closer to the main source of energy. Thus, stones or dust particles will fall faster than larger celestial body.

Scientists have not yet provided information on the distance between the Sun and the Earth and the time required for complete convergence of the planet and the Sun. Rumor has it that to avoid this disaster, the United States created a special department for the study of solar phenomenon.