Pyramids of Giza built by trade unions of hired workers?

It is traditionally believed that slaves were the main labor force in the construction of the pyramids of Egypt. However, it is not true, at least in respect of the pyramids located in Giza. Not that long ago, British archaeologist Richard Redding proved conclusively that these wonders of the world were built by free hired workers who even had their own unions.

The scientist suggested another theory of the construction of the ancient Egyptian pyramids. But questions remain. Why did the architects of the Great Pyramids need the outstanding size and exceptional accuracy? Why did they need a huge network of passages and chambers? However, all these questions can be reduced to three simple ones: who built the pyramids of Giza, why and how. 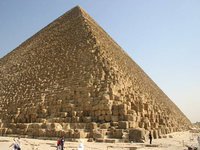 Archaeologist Richard Redding with Kelsey Museum of the University of Michigan believes that one pyramid during the 3rd and 4th dynasties of the Old Kingdom (2600-2100 BCE) took over 20 years to erect, and that eight to ten thousand people were involved in its construction.

According to Redding, the builders were not slaves, and there were no Jews among them. Jews appeared in Egypt much later. In an interview with LiveScience Redding said that the pyramids were erected by young men who were fed well and had access to good-quality health care, because they worked for the good of the society.

It was believed that after his death the king (the word "Pharaoh" appeared a thousand years later) was entitled to sit next to the gods and ask them to help his people, discouraging them from sending epidemics to the country or preventing flooding of the Nile. The pyramids were an important part of the preparation of the king to the heavenly journey.

Builders united in brigades or groups similar to contemporary unions. State officials appealed to the heads of provinces, indicating how many workers should be sent. Each prefecture would send their brigade. A work group had its own name, for example, the Drunkards of Menkaure.

The organization of work and servicing of such a great number of builders demanded maximum efficiency of the bureaucracy, Redding argued. Ancient Egyptians were sticklers for accounting and control. Numerous papyri were found that reflected meticulous calculations of the amount of consumed bread. Unfortunately, they are silent on the consumption of meat and the pyramid builders' nutrition in general.

Redding made his own calculations. On the basis of current statistical data, he calculated how many calories or grams of protein a person engaged in heavy physical labor should consume. Redding had to make appropriate adjustments because, according to the skeletons, ancient Egyptians were shorter than modern people.

As a result of his calculations, the workers consumed 67 grams of protein a day, or a little more than two McDonald's quarter pounders with cheese. Since the main supplier of protein is meat, every worker ate nearly 6 pounds (2.72 kilograms) of meat per week. The scientist suggested that half of the protein diet was fish from the Nile river and analyzed information about the remains of the ancient Egyptian cattle to calculate how much meat they could get from one animal.

Further calculations showed that 10,000 workers were eating 105 cows and 368 sheep and goats every ten days. To ensure a continuous supply of meat, herds numbering 21,900 cows and 54,750 sheep and goats had to be maintained. They required over a half million square kilometers of grassland, or about five percent of the area of ​​the Nile Delta, and almost 19,000 herders, nearly 2 percent of the country's population.

These data are partially confirmed by archaeological excavations. Redding and his colleagues found and studied 175,000 bones at a construction waste landfill. Half of the bones belonged to large cattle, most of the other half - sheep and goats. The scientists were able to identify up to 10 percent of animal bones. Pig bones were extremely rare.

Researchers drew attention to the remains dated with the time of the assumed emergence of the Giza pyramid, that is, four and a half thousand years ago. It is not known how the animals were brought to the construction site. Redding suggested that the herds were transferred by land, while his colleagues were in favor of the idea that the cattle was transported by river.

Every two years, state officials conducted a census of cows, goats and sheep to promptly take immediate action if necessary. Today, this kind of work is computerized. Workers lived in camps that resembled small villages and huts consisting of 20-40 people and a major administrative center. Food was prepared in centralized kitchens and then delivered to the destination. The higher the position of the employee, the better he was fed.

Redding's theory was supported by a New Zealand Egyptologist Jennifer Hellum with the University of Auckland. She believes that the Egyptian society from the very beginning had a very developed bureaucracy with a dominant hierarchical principle. Hellum said that the Egyptians had the most difficult level of bureaucracy to build a pyramid. They had census, taxation, and centralized government, everything they needed to achieve their goal.

Too high of a price had to be paid for this luxury. Pyramids, in the end, were destroyed by the state. After the 4th dynasty construction of the pyramids came to its end.