2012 was the peak in terms of pollen allergies in the northern hemisphere but what about 2013? Reports from across Europe indicate that a record number of people are suffering from red eyes, runny noses and sore throats - many of these for the first time. What is causing this epidemic? 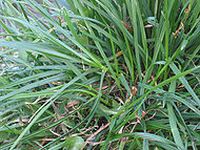 Can we start the piece by asking the question, does a peak in the incidence of hay fever actually have a direct relationship with pollen? Let the doctors answer the question. And let us add to that question several others. Does the massive increase in cases of hay fever in 2012/2013 have anything to do with global warming?

Or is there another factor? Two hundred years ago, hay fever was not reported; in the 1980s sufferers were around 50 per cent less than the number reported today. Are we therefore speaking about global warming, or something more sinister? Remember the hush-hush about GM crops (genetically modified cereals)?

The GM people are, predictably, silent. After all, they claim there is nothing sinister or dangerous about genetically modified cereals but from champion GM maker, Monsanto, you know, the one who made Agent Orange (screams) what to expect?

Let us dig deeper. Why are cancers of the digestive system rising exponentially? Let us start with Monsanto's wonderful herbicide, Roundup. The journal Current Microbiology has just released a report (1) on a substance called Glyphosate, created by Monsanto in the 1970s and used in Roundup. The report is shocking. It reveals that studies prove that Glyphosate is altering and destroying the micro-organisms in the soil, which has a potential effect upon the health of crops growing in it.

So devastating are the effects, according to the report, that some bacteria have disappeared from certain areas where Roundup was used to spray vast areas of land and apart from this, use of the product has spurred the appearance of superweeds, meaning that in turn farmers have to use greater and greater concentrations of the product. The soil is as a result being rendered barren for future generations.

So with this type of help from our illustrious Genetically Modified food barons, let us postulate what else is going wrong, exponentially, with our food chain and our environment. As Monsanto says, no cause to worry.

And why, suddenly, has up to 25% of the population fallen ill to severe symptoms of what they call "hay fever"? Let us ask Monsanto why it does not serve GM food in its own canteens. Of course there is no link.