A group of researchers from France "traveled" to the center of the Earth to find out the temperature in the heart of our planet. The scientists determined that between solid and liquid layers of the earth's core, temperatures make up about 6,000 degrees. The research has thus corrected an error made by their German colleagues, who conducted a similar study 20 years ago. 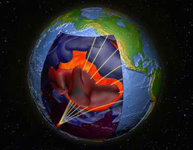 The first attempt to measure the temperature of the center of the Earth's core was made 20 years ago. The word "measure" sounds a bit strange in this context, as measurement stipulates the process, in which new information is obtained directly. The researchers should have placed a thermometer or a sensor in the center of the Earth's core, which is impossible, of course. However, where direct action is impossible, a "workaround" way may come in handy.

Indeed, we know that the core of our planet is mainly made of iron and metals close to iron. We also know that this "ball" stays under the pressure of more than 1.3 million atmospheres on the periphery. In the center, where the pressure is even higher, iron becomes solid again.

Scientists made the discovery about the existence of two layers of the core after they analyzed the movement of quake-caused seismic waves through the Earth. However, seismic waves, even if they were caused by major earthquakes, can tell nothing about the temperature of these layers. However, if we know under what pressure iron stays in each shell of the core, it is easy to find out the temperature in the core.

In 1993, Reinhard Böhler of the Chemical Institute of the Max Planck Society (Germany) and his colleagues conducted a curious research. In a specially equipped laboratory, they smelt iron at high pressures (created with the help of a diamond press) and temperatures (achieved with the help of a laser beam). As a result, the researchers found that at higher pressures, iron ceased to be liquid. The transformation occurs in the temperature range of 4800-5000 °C. The scientists eventually decided that this is the temperature that reigns in the center of the Earth.

However, most geophysicists immediately expressed their doubts about the reliability of the study. The fact is that even at 4500 °C and adequate pressure, iron continued to remain liquid. That is, the temperature difference between the two layers of the core was only 300 - 500 °C. According to calculations and data on the measurement of the geomagnetic field of our planet, the difference should be not less than 1,000 degrees. The temperature difference between the layers is considered the main factor in large-scale thermal displacements. Combined with the rotation of the Earth, it creates some sort of a dynamo machine that generates the magnetic field of the planet.

Not that long ago, a group of researchers from the Commissariat of Nuclear Power in France and the European accelerator facility ESRF in Grenoble decided to double-check the results of the study of their colleagues. To accomplish the goal, they developed a new technology based on intensive X-ray radiation produced by synchrotron. Interestingly, the diffraction of this radiation makes it possible to determine whether the test sample is solid, liquid or partially melted. The process takes only a second. This time is enough to keep the temperature and pressure on a permanent level and prevent unwanted chemical reactions - that is, to obtain the most reliable result.

Afterwards, the scientists began to use the methods of their German colleagues. They also brought the iron melting point to 4800 °C (at the pressure of 2.2 million atmospheres) and realized that iron does not harden, but remains partially molten under such conditions. Afterwards, they extrapolated the data to find out the temperature at the pressure of 3.3 million atmospheres - this monstrous pressure is typical of the boundary between the liquid and solid layers of the Earth's core). As a result, it was determined that temperatures should reach the level of 6000 ± 500 °C. Thus, the temperature difference between liquid and solid layers of the core has neared the very thousand degrees, of which geophysics spoke.

In addition, the scientists found the reason why their colleagues from Germany made the mistake. They determined the structure of iron by means of optical methods (that is, by looking at it through a microscope). However, starting with 2400 °C, the surface of the sample launches the process of recrystallization that leads to dynamic changes in the crystal structure of iron. Thus, the material might seem hard on the outside, but inside, it continued to remain liquid. That's what confused the experts from Professor Böhler's group.

Thus, the research of French experts that revealed the required 1,000 degrees, confirmed the validity of basic geophysical models. The research also tested an interesting technology for determining the structure of metals under extreme temperature and pressure. There is no doubt about the fact that the technology will be used by those engaged in the development of metal structures for spacecraft or other types of equipment used in extreme conditions.