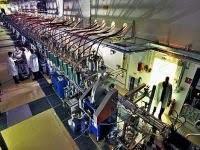 The dream of Sergei Korolev, Wernher von Braun and their predecessors to design a powerful engine for long-term space flight missions may soon come true.

The Mstislav Keldysh  Research Center in Moscow, has been working on developing a nuclear rockets propulsion system which will face new challenges of transport in outer space. The first tests are planned for 2018.

A new Russian nuclear rocket will multiply the speed of movement through space: a flight round trip to Mars will take two to four months, while the current rocket requires a year and a half to two years to accomplish the same trip.

"The issue is that chemical engines that are used today in the space industry have limitations in terms of specific impulse and, as a consequence, speed. It is simply impossible to accelerate above third gear space (equivalent to 16.6 km / s). With a  nuclear rocket, it is possible to achieve much higher values ​​of momentum," says Keldysh  center director, Anatoly Koroteiev.

The first nuclear engines for spaceships were developed in the Soviet Union and the United States in the 50s of the last century. The objective was to create rocket engines which, rather than with chemical energy for burning fuel and oxidants, hydrogen would be heated to a temperature of about 3000 degrees. But it this way turned out to be inefficient and both countries stopped the development of their projects.

Currently, the Keldysh  center offers a completely different approach. To explain this evolution, just make an analogy between a hybrid engine of a car and a common motor. A typical car engine turns the wheels, while the engine of a hybrid car generates electricity and this turns the wheels. That is, it creates a kind of intermediate power station.

The new space reactor works on the same principle. It does not heat the expelled jet stream from the engine, but generates electricity. The hot reactor gas rotates a turbine which in turn drives an electrical generator and a compressor by ensuring the flow of the propellant in a closed circuit.

The testing of the new engine will be made in relatively small Russians polygons, and thanks to this, there is no need to rent the bases of other governments, which always involve protracted negotiations over the use of nuclear power in a foreign territory.

Two years ago, a budget of U.S. $544.4 million was earmarked to fund the newly designed space module.  Of these resources, U.S. $232 will be spent by the state corporation Rosatom in the creation of the reactor. The creation of a nuclear propulsion system will be the responsibility of the Keldysh  Research Center.  Rocket and space corporation Enérguia will build the spacecraft that will be launched after 2025.