American scientists have discovered an interesting invisible fish. It was pirate perch, a favorite of many aquarists. However, it is not invisible in terms of visibility but, rather, in terms of scent. Olfactory receptors of virtually all its victims are unable to detect its scent. So far this is the only example of universal chemical invisibility in the animal world. 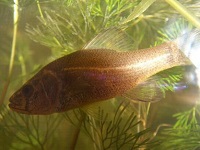 Many animals, both victims and predators, use odor masking feature. Animals try to mask their scent so that certain types of living beings could not detect them. People, who mainly rely on sight, may think of such camouflage as inadequate. However, in nature the ability to detect prey or enemy by smell is no less common than the visual aspect. Therefore, species that do not have a scent are often invisible to the world.

It was long believed that this masking can be misleading only to representatives of the same species. There is a certain "competition" between olfactory receptors and olfactory signaling molecules. If in the course of evolution a mutation occurs that slightly alters the structure of the molecule, the receptors may not be able to detect it. But because these same olfactory receptors of different animals are different, it is difficult to create a camouflage that would deceive them all.

A very clever caterpillar of the large blue butterfly (Phengaris arion) that lives in the ant houses of Myrmica sabuleti can be used as an example. Not only it lives there, but it also feeds on the ants' larvae. Most interestingly, it gets away with it because ants do not smell it.
However, the scent molecules of this caterpillar can deceive only the ants of Myrmica sabuleti type. If the caterpillar gets into the nest of another species, it would stop being invisible and will be immediately killed. Other ants' smell receptors have a very different structure, so the olfactory camouflage will not work.

Biologists were surprised to discover a creature with the ability to remain "invisible" to completely different species. It is pirate perch (Aphredoderus sayanus) found in North American waters, the fish appreciated by many aquarium owners. This perch is nearly omnivorous and therefore it attacks tadpoles and fry of other fish as well as aquatic insects with the same frequency. Simply put, its menu is very versatile. Interestingly, none of the victims smell the perch.

American zoologist Christopher Binkley with the University of Arcadia Glenside and his colleague William Resetarits of Texas Tech University experimented with several kinds of water beetles and tadpoles of dart frogs. All these species are included in the diet of the pirate perch. The researchers were interested in what ponds insects and amphibians would settle in, and which ones they will not be choosing. It was assumed that reservoirs with predatory fish will be included into the second category. The experiment involved fourteen species of beetles, larvae of three species of frogs and representatives of eleven species of predatory fish.

The results revealed that the insects and amphibians indeed avoided appearing in the ponds populated by predatory fish. However, this did not concern the pirate perch as they did not detect its presence. It was true for all the victims. Conducting controlled experiments, the scientists found that the insects and amphibians could not smell the predator. This allowed the bloodthirsty pirate to sneak up to the unsuspecting victim and grab it.

The article published by the zoologists mentions that the pirate perch somehow managed to become invisible for a number of potential victims. It is unclear how it was able to change the structure of its signaling molecules so that they are no longer picked up by completely different receptors. According to researchers, it remains to be seen with the help of biochemists.

So far this is the only example of universal chemical invisibility. However, scientists believe that this ability is not uncommon, and many other predatory fish also can mask from several kinds of animals. This is especially true for those types that hunt at night or lie in wait to ambush prey. The reason they have not been discovered is because they were not "caught in action" like it happened with the pirate perch.