Investigation reveals that Neanderthals died out earlier than thought

Probably the last surviving Neanderthals in the center and south of the Iberian Peninsula did not coincide with modern humans, scientists concluded from analyzes using an advanced method of dating. 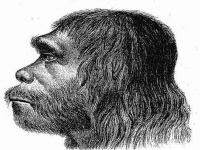 Neanderthals could have existed 50,000 years ago...

Probably the last surviving Neanderthals in the center and south of the Iberian Peninsula did not coincide with modern humans, scientists concluded from analyzes using an advanced method of dating.

It is possible that the theories about when Neanderthals disappeared from the face of the earth need to be modified, according to a recent study indicating that they became extinct in in Spain much earlier than was estimated.

Previous tests of fossils found in Neanderthal hotspots in the region placed the latest in the range of 35,000 years ago. But Australian and European researchers have re-examined the bones using a more advanced method to filter pollution, and concluded that the remains were about 50,000 years old.

If it is true, the study casts doubt on the idea that modern humans and Neanderthals coexisted, even mixed, for millenia, because it is believed that humans had not settled in the region until 42,000 years ago.

"The results of our study indicate that there are major problems in establishing the date of the existence of the last Neanderthals in Spain today," said Thomas Higham, Radiocarbon Accelerator and deputy director of the University of Oxford in England. "It is unlikely that Neanderthals survived longer in this area than in the rest of Europe."

The study, published Monday in the journal Proceedings of the National Academy of Sciences, does not completely exclude the possibility that Neanderthals survived up until 35,000 years ago. The problem is that the warm climate of the Iberian Peninsula quickly affects a key protein in the radiocarbon dating method.

Investigators could only test the bones of 2 out of 11 known Neanderthal areas in Spain. The bones were subjected to a new test called "ultrafiltration" that removes the latest carbon molecules that have contaminated samples and that make it seem like older bones are less old.

These techniques often lead to older dating, according to Chris Stringer, a researcher at the Natural History Museum in Britain. "Science and technology have advanced," he added.

Stringer, who was not involved in the study, said that new techniques must now be applied to other areas in Spain. "Until this is done, there must be significant doubt on the possibility that Neanderthals may have survived longer in the region."

If the remains from other places also turn out to be older, any encounter between Neanderthals and humans had to have occurred earlier than previously thought, he said.

"The evidence from Britain, Belgium, France, Germany and Italy increasingly are pointing to a modern human presence dating back less than 40,000 years," said Stringer. "The new chronology suggests that any interaction between the late Neanderthals and modern Europeans was more than 40,000 years ago."