Scientists seek woman to give birth to Neanderthal child

A Harvard scientist has started searching for the woman, who would agree to give birth to a Neanderthal child. The woman will be used to test the abilities of modern science to clone a caveman. 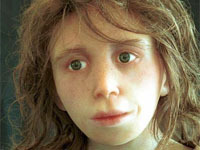 American geneticist George Church shared his thoughts of the unusual project with Germany's Der Spiegel. He said that he was almost ready to clone a Neanderthal, but he needed a woman for the project, who could bear and deliver the unusual baby.

The woman will receive an embryo with the Neanderthal DNA, placed in stem cells. George Church warned that child labor would be significantly different from what women usually experience. The birth canals of Neanderthal mothers were significantly wider than those of modern women, so their babies did not have to turn to get in the canals. In addition, the head of the Neanderthal baby is expected to be larger than that of normal children.

The professor is one of the authors of the project to decipher the human genome. He is sure that as long as modern science can clone a mammal, then one should try and clone a human or his next of kin.

"Let's experiment. If it works out - ok, if it doesn't - let it be disgusting. This is disgusting. There are psychological issues here. During the Neanderthals era, our left hemisphere was very weak, and our right hemisphere is older in the evolutionary process. As you can imagine, an unknown creature can be born," said the expert.

"We may see the creature - I do not even want to call it a human being - that will have a poorly developed left part of the brain. It will understand that it was born in this society, to this mother.

If medics find abnormalities in the fetus of a woman, they recommend her to terminate the pregnancy. What is the point to give birth to an unknown creature deliberately? For what? This is an experiment beyond good and evil. We are going to create a monster deliberately. The left hemisphere is responsible for the speech center, consciousness," said Levchenko.