Rate of warming in Antarctica is twice as imagined, says study

Researchers believe the plate temperature in the western region rose 2.4 degrees on average between 1958 and 2010... A new historical analysis of temperatures in West Antarctica revealed that the region suffers from heating at a rate twice faster than imagined. 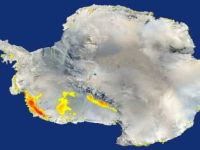 U.S. researchers say they have found signs of warming during the summer in the western Antarctica ice sheet (WAIS, in English). They fear that the melting of ice, caused by higher temperatures, may contribute to an increase in sea level.

The study by the  scientists was published in the journal Nature Geoscience. Scientists compiled data collected by the Byrd station, which was established by the U.S. government in West Antarctica in the 1950s.

Previous studies have failed to reach conclusions about the numbers raised at the Byrd station over the years, as there was insufficient data. The new research by U.S. scientists used computer models to fill gaps in statistics.

Based on these models, the researchers believe that the temperature has risen 2.4 degrees on average between 1958 and 2010. "What we're seeing is one of the strongest signs of global warming," said Andrew Monaghan, co-author of the study and a scientist at the U.S. National Center for Atmospheric Research. "This is the first time we were able to determine that that there is heating going on during the summer season."

It is natural to expect that the temperatures are higher during the summer compared to other seasons, but Antarctica is a cold region as the climate generally remains fairly similar throughout the year.

Professor David Bromwich, of Ohio State University, another author of the study, believes the research reveals that the planet has crossed a critical threshold. "The fact that the temperatures are increasing in summer means that the WAIS melt is not only from the bottom, as noted today, but also from the top."

Previous studies published in the journal Nature indicated that the temperature of the WAIS increased because of ocean warming, but new research indicates that the atmosphere also plays an important role.

Scientists say the these changes may be caused by changes in wind patterns in the Pacific Ocean. "We see a more dynamic impact that happens because of climate change elsewhere in the globe and an increase in the accumulation of heat in the WAIS," says Monaghan.

The research does not reveal the degree of influence of human activity on heating recorded in Antarctica. "This issue is still open. This study was not done. My opinion is that probably there is an impact of human activity in the Antarctic warming, but I cannot say that for sure."

For Professor Bromwich, a study to determine this particular issue needs to be done now. One fear among scientists is that landslides might happen with large chunks of glaciers, as happened in 2002 with the segment known as Larsen B.

In just one month, the Larsen B ice mass came off of the continent. "This is a constant concern about the melting in West Antarctica, where the temperature patterns continue this way in the summer."

The Antarctic ice shelf was 200 meters thick and had a surface area of 3,250 square kilometers.