Will there be another Deluge?

Environmentalists of Potsdam Institute for Climate Change have concluded that sea level will rise 60 percent faster than the world scientists predicted earlier. Every year for the last 20 years, sea level has been rising by 3.2 millimeters instead of the expected two. Such rapid changes suggest an imminent planetary catastrophe. 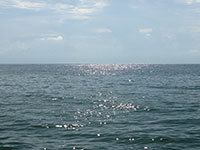 Previous forecasts of sea level change were made by the Intergovernmental Panel on Climate Change (IPCC). However, German experts together with their colleagues from France and the U.S. denied previous IPCC conclusions. Recent findings are based on a comparison of the forecasted increase in global temperature and sea level rise in the reports of the IPCC in the period from 1990 to 2011 with the results of the actual measurements taken from space satellites.

German scientists, as reported recently on the website of the newspaper Frankfurter Rundschau, based their conclusions on the evaluation of short-term fluctuations in temperature due to solar activity and volcanic eruptions, the so-called El Niño phenomenon. In other words, the rate of sea level rise in the last decade was higher than predicted earlier. According to one theory, this cannot be caused by local climatic events alone or periodic increase in the volume of fresh water from melting ice cap in Greenland and / or Antarctica.

"For a more accurate preliminary forecast it is important to continually check the forecast against the actual course of events and watch how the estimates are justified," said Professor Stefan Rahmstorf, the author of the study with the Potsdam Institute. "The new study emphasizes that the IPCC not only does not sound the alarm, but, on the contrary, in some cases underestimates the situation of the deteriorating climate."

The annual rise in water level in the oceans may trigger a planetary catastrophe. According to the IPCC, by 2100, sea levels could rise by one meter from the level of 2000. According to the Potsdam Institute for Climate Change, this increase may reach two meters. "The global temperature continues to rise at the rate projected in the last two IPCC reports," said Ramshtorf. "This again proves that the warming not only has not slowed down, but is not far behind the previous projection." In short, the scientists' warnings came true. This is not a horror story about the end of the world, but a scientific fact.

Compared to 2007, there was 18 percent reduction in the amount of ice at the North Pole, which is caused by the continued growth of greenhouse gas emissions. Washington Institute in its report noted that 70 percent of metropolitan areas such as New York, Los Angeles, Buenos Aires, Rio de Janeiro, Tokyo, Shanghai, Cairo, Jakarta, Lagos, Bangkok , Karachi, Calcutta and Mumbai may get into the flood zone. This does not include smaller cities and towns.

Forecasts aside, let's have a look at recent events. New Moore Island, located in the Bay of Bengal, went completely under water. In the fall of 2010, President of the Pacific state of Kiribati Anote Tong made an official appeal to his fellow citizens where he stated that resettlement due to the fact that the islands were disappearing into the ocean was not ruled out. The calculations of environmentalists confirm the events of this year when flooding in Venice became not only extremely dangerous, but also premature.

However, not all scientists agree with the pessimistic assessment of the situation. According to some experts, the increase in sea level by 2100 will not exceed several dozens of centimeters. Russian geographer Nikolai Osokin, for example, is full of optimism in this regard. He told Arguments and Facts newspaper that the balance in nature will continue. Melting of ice coupled with increasing air temperature would inevitably intensify evaporation of water from the surface of the oceans, therefore, the increase of its level will slow down.

Scientists are like spiders in a jar. Skeptics point to the fact that German scientists reported at a conference in Doha, where a debate around the future of the Kyoto Protocol that requires limiting emissions of greenhouse gases is ongoing. Some experts believe that the forecasts of the impending global catastrophe are caused solely by the pressure on its opponents.