Italian researchers expect to observe individual DNA molecules through a silicon pillars technique performed to observe the seven wires of the chain. Previously, the interpretation of the images required very complex mathematical calculations. Scientists at the University of Genoa have taken direct photographs of the seven strands of DNA.

Scientists at the University of Genoa, in the west of Italy, have managed to take direct photographs of the seven strands of DNA with an electron microscope. The technique used to clearly observe the double helix was to snag threads of DNA in a diluted solution and put them on nanoscale silicon.

The team, led by Professor Enzo di Fabrizio, developed a model of pillars that is extremely water repellent, causing moisture to evaporate quickly, leaving behind the DNA strands, which were stretched and could be seen clearly.

Then, to obtain images of high resolution, tiny holes were drilled on the basis of the silicon pillars.

According to the team, the next step is using this technique to observe individual molecules of the chain and its interaction with RNA, proteins and other biomolecules.

The theory of the structure of the double helix of deoxyribonucleic acid was proposed in 1953. by James Watson and Francis Crick was presented based on the 'Photo 51' image obtained in 1952 by Rosalind Franklin and Maurice Wilkins by X-ray diffraction

The technique was improved in the following decades, but the interpretation of the images required complex mathematical calculations. The data obtained through this method allowed researchers to define the placement of atoms and the structure of the molecules, but only gave a theoretical concept for the object of research. 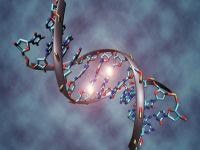