The heat, carbon dioxide and air pollution are already having significant effects on trees, plants and crops, and for most scientists specializing in plants, the debate over climate change is over long before the occurrence of the weather extreme known as Hurricane Sandy.

Now, some of these scientists have gone beyond political issues to explore how increased levels of heat and emissions can provide at least some benefit to the planet.

"It is customary to give too much emphasis to the mitigation of global warming, and this is necessary," said Lewis H. Ziska, plant Farm Bureau physiologist, one of many scientists who increasingly have studied how plants react to high levels of greenhouse gases and other pollutants. At the same time, he added, "we need to think about the tools which we have, and how we can use them to make climate change act in our favor."

Among these tools are the cities that have conditions that can simulate how life can be in the temperate zone of a warm planet.

"The city is our baseline for what can happen in the coming decades, and despite all the negative effects of global warming, there may be something good to come," said Stephanie Searle, plant physiologist who led a research project at Columbia University on tree growth, and now works as a researcher on non- pollutant biofuels at the International Council of Transport, a nonprofit organization. "Higher night time temperatures, at least, can boost plant growth."

Such robust growth, in turn, causes more carbon dioxide going into the atmosphere.

Still, some emissions are not useful for plants. There are also plenty of modern pollutants, such as ozone and heavy metals which are toxic to plants, to man or to both. Moreover, until now, the long-term effects on plant life on the planet, as it is heated, becomes clear.

"I try to avoid words like:  good, bad, harmful or beneficial" said Kevin L. Griffin, ecophysiologist at Columbia University, who participated in a study on the "island heat effect" in red oaks of New York.

The effects of most higher urban emissions led Ziska to reassess global warming as bringing potential benefits for mankind. In an essay published last fall by the journal Proceedings of the Royal Society, Ziska and a group of colleagues from around the world argued that the expected increase in the world population of seven billion to nine billion people by 2050 requires that a "green revolution to improve the yields of basic grains."  Carbon dioxide, the group suggested, could be the answer.

Since 1960, atmospheric concentrations of carbon dioxide in the world increased by 24 percent, to 392 parts per million, and can reach a thousand parts per million by the end of this century.

Although plants require carbon dioxide, and generally perform better with higher concentrations of the compound, "not all species react well" explains Ziska. This may be especially true in the case of domesticated species that have little genetic diversity.

"The creators are not actively selecting plants according to different reactions to CO2," said Ziska. "They are more interested in resistance to droughts and pest control."

Nature, however, "selects what works for her," he said. "Our hypothesis is that the natural environment makes this selection very soon according to the CO2 available."

Ziska explained that his research has focused on rice, but that scientists must also be capable of identifying wild progenitors of "soy, wheat, oats and so on." If they are successful, "the result is of double value," he said. "What we want is to absorb more CO2 and exploit CO2 as a means to increase revenue. This is the goal."

For eight years, in New York, researchers from Columbia studied the growth of red oak seedlings in four locations, including one "urban" location near the northeast edge of Central Park at 105th Street and a "remote" location in the Catskill Mountains, 160 miles north of Manhattan, near the Ashokan Reservoir.

Griffin, who oversaw the project in conjunction with the Black Rock Forest Consortium, located in upstate New York, chose the red oaks because they are a native of New York. He said he wanted students to check whether the oaks in cities grew differently from the the oaks in the interior, and, if so, to find out why.

Cities produce high levels of atmospheric carbon dioxide, nitrogen oxides and ozone, all of which influence the performance of the plants.

The island heat effect occurs because the buildings, sidewalks and asphalt absorb and retain more solar energy than the fields and forests of the interior. During the warm months, the stored energy in the city is radiated back into the atmosphere after dark, keeping urban night temperatures significantly higher than rural temperatures.

The first experiments of the Columbia team with red oaks finished in 2006, and the average minimum temperatures of 22 degrees Celsius in August were recorded in the urban area, but 17.5 degrees Celsius in the Catskills. The researchers also noted that the city oaks had elevated levels of nitrogen in leaves, a plant nutrient.

The team held two more rounds of experiments. Then, in 2008, they made a final test outdoors, using rural land fertilized everywhere, so that all plants received enough nitrogen. The urban oaks, harvested in August 2008, weighed eight times more than the interior, mainly because of the increased foliage.

"On warm nights, the tree breathes more," said Griffin. "It invests its carbon sugars in the construction of tissue."

In the morning, the tree sugars are depleted, and it has to perform more processes of photosynthesis during the day, Griffin continued. The tree develops more leaves and becomes larger.

Still, it is clear that there are some issues that are not useful to the plants, even in the north. The inspiration for the experiments with the red oask was a study published in 2003 by the journal Nature, describing how willows grow twice as fast in New York City than in the interior. However, in this case, the difference in growth was not a matter of benefits derived from urban emissions. Instead, the interior willows were exposed to higher concentrations of ozone in the atmosphere, which stunted growth.

Jillian Gregg, an ecologist who led the study, said that although the willows have been shown to be sensitive to ozone, many plants are also susceptible to its effects. Ozone, or O3, a molecule of three oxygen atoms, that can seriously damage the pores of the plant, caused them to grow more slowly.

The elevated ozone comes from the city, where nitric oxide from the exhaust of cars and factories becomes a catalyst that allows free atoms of oxygen to  combine with atmospheric oxygen, O2, to create ozone molecules. But much of the urban ozone is eventually reverted to O2.  The ozone that is not reverted goes back to the interior.

Scientists warn that while studies conducted in New York in August may be a way of visualizing the temperate zone in the future, there may be problems in warmer latitudes, in which there are lush parks during the summer in the north. Also, if the trees grow faster for a few years, this says nothing about how their root systems can cope with droughts or storms after a hundred years.

The ancient urban oaks, Griffin noted, are not taller than the ancient oaks of the interior. 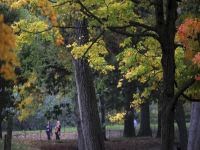