Science and a young Earth 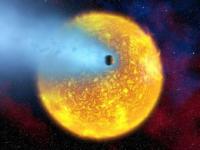 The reason for such huge discrepancies from radiometric dating is because the rate of decay is not the same today as it was in the past. Evolutionary geologists go on the assumption that no major changes have occurred in the past which could have affected the initial amounts and even the rates of decay of the substances involved (Industrial Research 14 [1972]: 15). If, for example, a world-wide flood the Bible describes in Genesis had actually occurred then it would have, indeed, altered the initial conditions so as to make radiometric dating less than an exact science, to say the least. The Carbon -14 dating method has been known to have fifty percent accuracy, but it is only accurate up to thousands (not millions or billions) of years and can only be used on things that were once living.

There are many problems, however, with many local floods as the cause behind the fossils. Even today local floods are not known to be able to generate the type of tremendous pressure and force necessary to fossilize creatures in rock. Among other arguments, it is difficult to explain how local floods could have carved out such majestic and geographical wonders as the Grand Canyon which is thousands of square miles and packed with billions of fossils and was clearly formed by the cataclysmic action and force of water. Yet, evolutionary geologists are content in believing that the Colorado River merely overflowing its banks,over millions of years, was capable of performing such a feat!

Passages in the Old Testament Book of Psalms (i.e. Psalm 104) describe God as raising high mountains from the earth after the world-wide flood so that the water would recede into the ocean basins. The tremendous velocity and pressure from such receding water is what most likely caused the formation of the majestic Grand Canyon with its billions of fossils.

Furthermore, evolutionary geologists believe that the lowest layers contain only fossils of simple organisms while the higher layers contain only fossils of complex organisms. This, according to him/her, is evidence that complex organisms evolved from simpler ones over many millions of years. As a result of this view, the evolutionary geologist dates fossils according to the layer of rock in which they are found and, in turn, dates rocks according to the type of fossils they contain (circular reasoning!). Thus, the evolutionary geologist simply assumes that rocks which contain fossils of simple organisms must be very old (because of his/her assumption that those organisms evolved first) while the rocks containing fossils of complex organisms must be younger (because of his/her assumption that those organisms evolved more recently) even when there is no actual physical differences between the rocks themselves!

There are numerous examples of layers containing "mixed" fossils where fossils of creatures that are supposed to have existed millions of years apart from one another are found right next to one another within the same layer or stratum (i.e. fossils of dinosaurs and birds in the same stratum. That definitely refutes the theory that birds had evolved from dinosaurs! There have been found dinosaur footprints and human foot prints crossing each other's paths!). Evolutionists simply ignore these fossils and continue with their dogmatic beliefs.

Besides the many assumptions involved, there are other problems with this view. First, there are no actual transitional stages to connect the so-called progression of simpler organisms in the fossil record to more complex ones. For example, there are no fossils of fish with part fins, part feet to show that fish evolved into land animals. In fact, the fossils show only complete and fully-formed species. There are no partially-evolved dinosaurs or anything else to indicate macro-evolution in the fossil record. Second, this idea that the lower layers contain fossils of only simpler organisms exists only on paper, in evolutionary textbooks, and not in the real world. There are many areas in the world where fossils of complex organisms are found way beneath layers containing fossils of simpler organisms with no evidence of any shifting of these layers. Of course, if a world-wide flood did occur, then in many cases the lower layers would contain fossils of simpler organisms because these would naturally be the first to be deposited.

The recent discovery of dinosaur fossils containing actual soft tissue is powerful evidence that the fossil layers are not millions of years old because such tissue cannot possibly be preserved through millions of years.

This discovery was finally examined by a peer review of fellow scientists who, instead of really addressing the problem, dismissed the strong evidence of a thousands of years old dinosaur soft tissue. See for yourself whether it was real science or evolutionary bias that determined their conclusions.

Recent scientific data shows that the rate of erosion would have leveled all the continents on earth over fifty million years. Even evolutionists acknowledge this, but evolutionists claim that after the continents were fully eroded new geological upheavals created more continents and mountains. But, if this were truly the case, all the fossils should have also disappeared. The fact that all the continents, with their mountains, still exist is powerful evidence that the earth is, at least, far less than fifty million years old!

Another major fact pointing to a young world is what is known as the "genetic load". The accumulation of genetic mutations, which are almost always harmful, will cause, over time, species extinction. Evolutionists realize this. The fact is, if our world were really millions of years old, all species would have become extinct long ago due the genetic load (the net accumulation of harmful mutations).

Many have insisted that our world and universe must be billions of years old because it would have required billions of years for light from the farthest stars to reach the earth. This is assuming that the stars, galaxies, and universe were not created complete and fully mature from the beginning, with the light already reaching the Earth from the moment of creation. Creationists believe that because God created a mature universe from the beginning, it naturally has the appearance of being much older than it actually is. For example, when God created the first man and woman they were mature adults and complete from head to toe. If we had observed them five minutes after they were created we would have thought from their appearance that they had been on earth for many years, even though they were freshly created from the hand of God.

Some creationists theorize that, by applying Einstein's theory of relativity, during the fourth day of creation week billions of years transpired in the rest of the
universe as God "stretched out the heavens."

According to evolutionists, our moon is nearly as old as the Earth and, from the rate of unimpeded meteors hitting the moon's surface over billions of years, there should be many feet of lunar dust on the moon's surface. Unlike the earth, the moon has no atmosphere to burn up meteors so massive collection of dust was a major concern for scientists and they were concerned that the lunar module, carrying the astronauts, would sink into many feet of dust. But, when we actually landed on the moon the astronauts discovered only a very thin layer of dust. This is strong evidence that our earth/moon system is young after all.

There is much more to say on this subject, and there are many positive evidences for a young earth and universe not covered in this article. Excellent articles and books have been written by highly qualified scientists, including geologists, who are creationists showing scientific evidences for a young earth and universe. M.I.T. scientist Dr. Walt Brown provides considerable information on the topic at his site www.creationscience.com. Also, considerable information on the subject is provided by scientists of the Institute for Creation Research.

*I have had the privilege of being recognized in the 24th edition of Marquis "Who's Who In The East" for my writings on religion and science, and I have given successful lectures (with question and answer time afterwards) defending creation from science before evolutionist science faculty and students at various colleges and universities. The author's website may be accessed at: www.religionscience.com.