Elephant can repeat words in Korean - Koshik, an elephant, manages to imitate words such as: sit, no, lies and good.  Researchers claim that the animal had to have created a technique to imitate the human voice timbre and tone, using its proboscis and mouth. It was discovered from videos posted on You Tube. 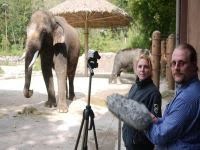 An elephant in a South Korean Zoo is able to mimic human speech, repeating words in Korean. Koshik vocalizes, using its proboscis and mouth, words like: Hi, sit, no, lies and good. Researchers still do not know why this is, but believe that the ability is related to the fact he lived alone, without the presence of other elephants at the Everland Zoo in South Korea.

"He lived alone for many years and we believe that because elephants are highly social animals, he apparently found a way to have some form of social life," said the iG Daniel Mietchen, Samsung Everland Zoo and one of the authors of the study published on Thursday (1st) in the scientific journal Current Biology. The team with researchers from Austria, Germany, USA and South Korea discovered Koshik from videos posted on Youtube in 2006 and then decided to study the case.

The elephant can mimic two of the most important aspects of human speech, the tone and timbre, which allows it to be perfectly understood by Koreans. "He manages to accurately mimic the tone of voice of his coaches. This is awesome if we take into account its size, length of the vocal tract, in addition to all other anatomical differences between elephants and humans," said Angela Stoeger-He, of the University of Vienna.

For him to achieve this feat, the elephant has created a peculiar technique: the researchers observed that he puts his trunk in his mouth to pronounce the words. This behavior, atypical in elephants, is used by Koshik to adapt the vocal system. The technique also explains why the sound is more serious than issued usually by the species.

"We still cannot explain why the sounds of Koshik are so similar to human speech. Anyway, the vocal learning phenomenon has been observed in a number of other species such as parrots, seals, sea elephants and whales," said Mietchen.

Also published last week, in the same journal, was a study about a white whale that could mimic the sound of human speech. Unlike Koshik - that can make words - the whale, Noc, at the National Marine Mammal Foundation in San Diego (USA), vocalizes sounds similar to a distant conversation between two people, but with no discernible words. "These cases generate strangeness, but we believe they are more amusing than frightening," said Mietchen.

15:58
DPR may not execute British mercenaries
15:55
ASOS in its latest update mocks Russians because of the sanctions
15:23
Finnish FM: Trust between Moscow and the EU will be restored
14:40
Inflation in Italy reached its highest level in 36 years in June
13:35
Spiegel: Germany demands Lithuania to lift the ban on transit to Kaliningrad
12:29
Henry Kissinger: There are three possible outcomes of the Ukraine crisis
11:53
Putin's decree causes securities of Japanese companies to fall
11:28
Russia lifts all coronavirus restrictions as COVID-19 incidence falls 64 times
18:26
Scholz names the conditions for lifting anti-Russian sanctions
17:40
Russian intelligence: Poland's working on scenarios for the dismemberment of Ukraine
World
Putin answers to Ukrainian's HIMARS with Sarmat and S-500