Marine animals have decreased its size because of global warming

For aquatic species, it is more difficult to obtain oxygen from the increasingly warm waters... The increase in size of the body of aquatic animals is different from the Earth. Per degree Celsius, aquatic animals shrink 5 per cent, while the land loses only 0.5 percent of its dimensions. 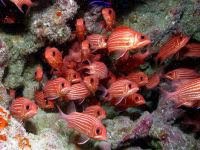 The increase in size of the body of aquatic animals is different from the Earth. Per degree Celsius, aquatic animals shrink 5 per cent, while the land loses only 0.5 percent of its dimensions.

A new study from the University of Liverpool in England revealed that because of global warming, sea animals shrink ten times more than land and freshwater animals.

According to experts, the decline in aquatic life is due to the fact that it is harder for these species to get oxygen from the warmer and warmest water ever," a problem that terrestrial creatures do not have."

"More oxygen is needed with the temperature rise, as the sea inhabitants diminish in the size of their bodies to balance the supply and demand of the above mentioned gas," they indicated.

After the results of the maturation of fishes and another 169 marine species were analyzed, along with terrestrial and freshwater animals, scientists concluded that such "marine shrinkage" could affect the production and supply of seafood in the world.

The experts recalled that fish in the seas, rivers and oceans feed some three billion people and represent at least 15 percent of the consumption of animal protein, so that "the influence of global warming on living species is crucial."

Greenhouse gas emissions are more serious and extensive than what was thought until now.  Specialists warn that they could have effects on interactions in the tropics, fisheries, ecosystems and the global supply of protein.