Learning does not stop when people are sleeping

Human beings can relate odors to sounds while sleeping, according to a new study, published in the journal Nature Neuroscience.

The researchers put sleeping masks on the participants, which were filled with pleasant and unpleasant odors:  shampoo, perfume or the odor of fish and other decomposing animals.  Odors were accompanied by different sounds.

Participants continued to change their breathing patterns in response to sounds after awakened, although they claimed not to remember smelling odors or hearing sounds while they were sleeping.

It has been shown that humans can consolidate information assimilated during sleep during the day. However, attempts to teach new things to people while they sleep were not successful.

"According to general knowledge, people cannot learn new information while they sleep, even if the brain can perform many other tasks at that time," said lead study author, Anat Arzi, a graduate student at the Weizmann Institute of Science of Israel.

Now, researchers are looking for ways to use their findings in practice, as in conditioning people to change bad habits.

"We need to understand where the line is between the possible and the impossible to learn during sleep," said Arzi. 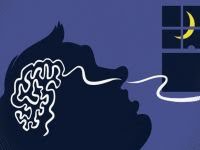