Scientists discover why supermarket tomatoes have no taste

Study in the United States showed that fruit that ripens uniformly is preferred by producers, but lose their flavor 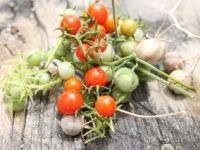 The difference in taste of supermarket tomatoes compared to those from the garden has genetics as an explanation. An international team of researchers identified the genetic mutations responsible for the uniform maturation of fruit that also causes the least amount of sugar in the tomato.

For decades, farmers have been selecting tomato varieties that are green before they ripen uniformly. Thus, the fruits can be harvested at the same time. Another benefit is that with the uniformity, it is easier for the producer to decide whether the fruit is ripe or ready to be sold. However, this feature also results in an unexpected reduction in the sugars which affects the flavor of the fresh fruit and its suitability for processing.

This is because the gene responsible for this uniform maturation also causes the chloroplasts - the organelle responsible for photosynthesis in this fruit - not to be as developed or as abundant as in wild tomatoes.

"Tomatoes with more developed chloroplasts have better photosynthesis, fix more carbon into sugars and synthesize more lycopene. As a result, they are sweeter," said Ann Powell iG, biochemistry at the University of California and author of the study published today in the journal Science. The investigator also states that 80% of the sugar found in the fruit comes from photosynthesis of the leaves, where the sugar is produced.

Ann says that the information on the gene responsible for the sweet varieties of wild tomatoes provides a traditional strategy to regain the quality that had been created, without knowing, in modern cultivated tomatoes.
.
Translated from the Portuguese version by: