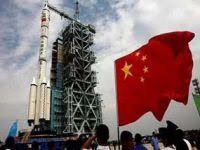 China plans to launch in the middle of this month its manned spacecraft, Shenzhou-IX, for the first manual docking of this country, which will be executed with the module Tiangong-1, industry sources announced.

The device and its carrier rocket, the Long March 2F, were transported at 10:30 local time this Saturday to the launch platform from the Jiuquan Satellite Launch Center in northwest China, said a spokesman for the Manned Space Program.

The Jiuquan Satellite Launch Center was the country's earliest base and where most launches and tests have been conducted. It is very large at 2,800 square kilometers -- and the climate makes it possible to launch 300 days out of each year.

In the next few days, scientists will carry out tests on the functioning of both vehicles, as well as those of a selected group of taikonauts, a in which women are included.  The term taikonaut is used by some English-language news media organizations for space travelers from China.  It is a hybrid of the Chinese term taikong (space) and the Greek naut (sailor).

China has made steady progress with its space programme since 2003, when it became the third nation in the world to send humans into space, after Russia and the United States.

The Tiangong-1, launched last September 29, reached orbit at the dock earlier this month, according to a spokesman, quoted by the press.

Final preparations for this new step in China's construction of its own space station move smoothly and taikonauts (Chinese astronauts) completed their training and are in an excellent physical and mental state, he said.

Shenzhou IX and its carrier rocket were taken to the center in early April this year.

The final selection of three crew members will be decided "at the last moment," as advertised.