Today's "Ring of Fire Eclipse" (May 20) is known as an annular solar eclipse.  Annular eclipses only occur when the moon is at a point in its orbit that is too far from Earth to completely block the sun. The result is a  ring-like, or annulus, an effect that will be visible to observers lucky enough to be in the path of the eclipse's shadow. 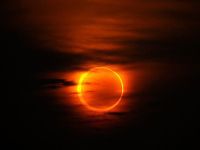 It will cross the northern Pacific Ocean, then make landfall in northern California. From start to finish, the annular solar eclipse, the first solar eclipse of 2012, will last about 3 1/2 hours and cross about 13,600 kilometers (8,450  miles) as it moves across the Earth.

It will not become as dark as night.  Instead there will be a weird 'counterfeit twilight' as as the light may become unearthly.  The temperature may take a perceptible drop; a cool breeze may begin to blow.

Viewers should also look for Venus - it's shining east of the sun. Jupiter and Mercury will be on the other side of the sun by about a quarter and a third as far, respectively, and they're not as bright.

The eclipse should only be viewed with solar eclipse glasses or other special viewing devices that anyone interested can get directions for on the Internet.  Otherwise, looking at the eclipse without protection can cause serious eye damage.

NEVER observe the sun directly or with telescopes or binoculars without using proper solar filters. Regular sunglasses do NOT provide adequate protection for solar eclipse observing.

Skywatchers use solar filters for telescopes or binoculars to safely view the sun. Special eclipse glasses or welder's glass No. 14 can also serve as a proper filter.  A simple, safe way to observe is to create a pinhole projector or a pinhole camera.

The six-person crew of the International Space Station will attempt to observe the moon's shadow on Earth cast by the eclipse.

These celestial happenings are seen as significant by Luciferians and other occultists.  This Annular Solar Eclipse, with its unique rare conjunction with Pleiades, is associated with the return of the Phoenix.

Venus has been associated with Lucifer and the Phoenix in the ancient world because Venus was one of the brightest stars in the known heavens. They also associate it with the coming of the Anti-Christ.