Who's a clever birdie then?

A lost parakeet has been returned to its owner near Tokyo in Japan after giving its address to the local police force. The 64-year-old owner had previously lost another bird and, determined not to lose another, taught the bird to say where it lived. 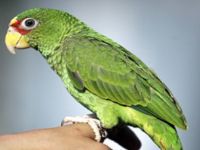 Sagamihara, neat Tokyo. Sunday morning, April 29...a male parakeet saw the window open and bolted for its freedom. It flew around the city for several hours and then, used to humans, landed on the shoulder of a guest at a hotel, whereupon it was captured and delivered to the local police force.

It stayed in the police station all day Monday without saying a word, and on Tuesday evening, just as the police were trying to decide what to do with the bird, it started saying its address - first the city, then the district, then the number of the street and block. It was then returned to its 64-year-old female owner, and she explained.

She had previously had another parakeet which flew away and never returned. When she bought this one two years ago from a pet shop, she was determined that the same thing would never happen again, so she spent hours and days and weeks and months teaching it to say where it was from.

Experts say that getting a bird to speak is more than just buying a particular species, because some birds from species that are famous for having wide vocabularies, for example, do not speak at all. It also has to do with spending time with the bird, teaching it to speak through long sessions of repetition.