Bees are able to manipulate abstract ideas, like mammals 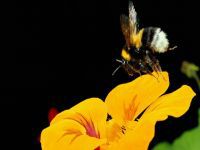 Research done on insects has shown that sophisticated cognitive analyzes are possible even in the absence of language...

Bees are able to take into account the relationships between objects, as well as abstract concepts - a privilege that was believed as reserved for the brains of mammals, according to a study from the French National Center for Scientific Research (CNRS).

The fact that bees can simultaneously use two abstract ideas is a result "completely unrelated to the brain size of mammals such as humans, say the scientists in this study, published by the American magazine PNAS (Proceedings of the National Academy of Sciences).

In everyday life, the human being uses concepts that relate to different objects through systems such as "equal," "different," "greater" and "up".

The team of Professor Martin Giurfa (CNRS), University of Toulouse III Paul Sabatier, showed that the bees were also "capable of generating and then manipulating concepts to gain access to a food source."

"It was also noted," said the teacher, heard by telephone, "that they can even use two different concepts to make a decision, comparing them to a new situation."

Bees have shown they can get water with sugar (the reward) or a liquid sour (punishment) through two orifices placed between images that were varying in position. They were served by the notions of "up" or "beside," that were associated with reward or punishment.

"After 30 attempts, the bees went on to acknowledge, without ambiguity, the relationship that would lead to the sugar water," even "when images were used that were never seen," explained Professor Giurfa.

According to scientists, the experience has highlighted a distinction, that the bees ignored the stimuli performed with identical images, "showing that, besides the concepts 'above, below and beside'  they simultaneously manipulated the concept of 'difference' to make their decision."

"This capability, which was believed to be only in humans and some primates, demonstrates that cognitive, sophisticated analyzes are possible in the absence of language, although a neural architecture in miniature," they concluded.

This research by CNRS, provided in a notice, "questions many theories in areas such as animal cognition, human psychology, neuroscience and artificial intelligence."