James Cameron dives to the deepest point of the Pacific Ocean...The Director of the movies "Titanic" and "Avatar" resurfaced after diving alone in special equipment 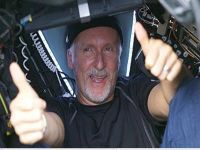 The director of "Titanic" and "Avatar," James Cameron, returned safely to the surface after making a dive to the deepest known part of the Pacific Ocean, informed the organizers.

Jim Cameron returned to the surface. "Congratulations on this historic dive to the deepest part of the lonely ocean," he said through the social network, Twitter, to the mission "Deep Sea Challenger," which organized the expedition.

The National Geographic, expedition partner, said that Cameron had reached in his submarine, designed for the occasion, the deepest known area of the ocean, located 10,898 meters, at 7:52 a.m. on Monday, local time (18h52 Sunday, GMT) in the Mariana trench.

James Cameron is the first person to make a dive to the bottom of the Trench, with the craft known as Deep Sea Challenger southwest of Guam. It is expected that he has obtained 3D images that may help scientists better understand this unexplored part of the Earth.

Cameron took 156 minutes to reach the 35,800 feet-deep ocean floor and just 70 minutes to return to the surface.

Cameron later told how he hurtled down a "yawning chasm" into the "last frontier on planet Earth." He also said he was stunned by the "completely featureless, alien world".

Once back at the surface, he said: "I felt like I, in the space of one day, had gone to another planet and come back. Falling through darkness - that's something that a robot can't describe."