Russian scientists have successfully tested the world's first hybrid superconducting electrical cable. This small cable consists of magnesium diboride, a superconductor, and a cavity for the transportation of liquid hydrogen. The latter, while cooling diboride to a temperature of 40 degrees Kelvin, causes the effect of superconductivity. 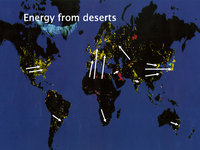 The problem of superconductivity, that is, the material's ability to conduct electricity without resistance, has been the subject of much attention from scientists and engineers since the beginning of the last century. Indeed, if it were possible to manufacture this material on an industrial scale, the threat of an energy crisis could be forgotten. In addition, the introduction of superconductors would encourage the development of alternative energy, for example, solar energy.

An interesting project on the subject was presented at a symposium at the Institute for the study of environmental sustainability in Potsdam, Germany in May of last year by the famous physicist Alex Muller. According to his calculations, if we were to install solar panels on the area of ​​300 square kilometers in the Sahara desert with 360 ​​sunny days a year, they would produce as much electricity as is now produced by all power stations in the world. To cover the electricity needs of the entire Europe, a battery with an area of ​​50 square kilometers would be sufficient.

Needless to say, it sounds tempting if it was not for one caveat. In order for this project to be implemented, superconductors are required. Otherwise, the electricity from the Sahara would not reach even the south of Europe as it would be spent on overcoming the resistance of the material. At the same symposium, as a result of discussions among scientists, it was found that only lines of constant current are suitable for the transmission of electricity over long distances (e.g., three to five thousand kilometers). The popular air transmission lines AC have limitations in terms of length and can only stretch for several hundred kilometers. The power should be approximately ten gigawatts.

However, recently it became clear that everything can be done much easier. At the beginning of this century, physicists have described the effect of superconductivity that occurs in crystals of magnesium diboride (MgB2). This material becomes a superconductor at 40 K (-233.15 degrees Celsius). But this is the temperature that can be easily obtained by cooling the material with liquid hydrogen. In addition, magnesium diboride is easy to obtain on a commercial scale.

At the symposium in Potsdam an interesting idea was proposed: what if the scientists were to create the so-called hybrid cable? It would house the superconducting filaments of MgB2, and in the very middle there would be a cavity through which liquid hydrogen will be transported.

Thus, two birds can be killed with one stone. First, the liquid hydrogen will be able to cool the magnesium diboride to the desired temperature, and it will become a superconductor. Secondly, hydrogen is a promising fuel. Currently the main problem in using it is the high cost of production, since it consumes much more energy than the effect of using this gas is.

But factories for its production can be built in Sahara, where they would work on solar energy. Thus, the greatest desert of the Earth would be both the provider of alternative fuel and super cheap electricity. The stumbling block is a conductor.

Russian experts from the Institute of Microelectronics Nanotechnology, Russian Research, Design and Technological Institute of the cable industry and the Moscow Aviation Institute decided to implement this wonderful idea. They created a cable with the diameter of 26 millimeters with a cavity for the transportation of liquid hydrogen in the center (its diameter is 12 millimeters).

Outside of it is the current-carrying layer, consisting of five strips of magnesium diboride (produced by specialists from the Italian company Columbus Superconductor), spirally arranged on the core of a bundle of copper wires. In addition, the liquid hydrogen circulated in the cavity between the outer cable sheath and the inner wall of the cryostat. The length of the experimental cable was ten meters, which was sufficient for the first test.

Recently, this new product has been tested on a special stand of the Chemical Automation Design Bureau in the city of Voronezh. According to the test results, it became clear that it worked and the cooled magnesium diboride has shown the properties of a superconductor. According to a fellow of All-Russian Scientific Research of Design and Technology Institute of the Cable Industry Vitaly Vysotsky, the experiment showed that in this model the flow of liquid hydrogen at 200-220 g/s is able to carry approximately 25 megawatts of power. In parallel, approximately 50 megawatts of electricity was transmitted with the superconducting cable.

However, according to the scientists, this is not the limit. Vysotsky said that "the last indicator can be easily tripled by adding the number of superconducting tapes. At the industry scale by increasing the current, voltage and volume flow of hydrogen (which is solved by increasing the diameter of the pipe) a much more powerful energy flows can be transmitted." That is, the supposed power of ten gigawatts is not something fundamentally unattainable for this cable.

The Russian scientists have said that this experiment was very promising. It became clear that the creation of superconducting power transmission lines from inexpensive materials is possible in principle, even on the industrial scale. For Russia with its vast distances it is especially important, because the existing power structures will never be sufficient. The superconducting cables would solve the problem quickly and easily - just one or two plants would supply energy to all citizens of Russia, from Kaliningrad to Vladivostok.