Is there place for sex in space?

Since 1982, men and women have been traveling to space together. Prior to the advent of the first woman in space it was suggested that scientists intended to research coupling in gravity, and experiments are being conducted to determine whether a human can reproduce under these conditions. 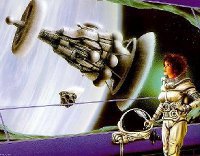 The first person who openly wrote about it was a Frenchman. In 1953 then little-known writer Pierre Boulle - later the author of the novels that have become classics of cinema, "Bridge on the River Kwai" and "Planet of the Apes" - wrote a frivolous science fiction story L'Amour et la pesanteur ("Love and Gravity.")

The story goes that at a space station, Joe was listed as a janitor. Before he went to space, maid Betty became his bride. On board the "Satellite" (the name of the space station in the story) there was a priest who married the couple. However, despite repeated attempts to make love on their wedding, night the bride and groom have failed because of zero gravity.

Joe and Betty were forced to postpone having sex until the return to Earth. The final conclusion by Joe was that, while the Satellite maybe a great thing for scientific observations, it was the last place in the world for newly weds.

Ten years later, first woman Valentina Tereshkova traveled to space, and co-traveling of both sexes moved from the realm of science fiction in the realm of reality. Tereshkova was on board "Vostok 6" alone, and orbital stations at that time did not exist.

However, the authors of the myths "about the space love" talk about spouses Nicholai (according to other sources - Anatoliy) and Ludmila Tokov, allegedly sent to space in one of the first "Soyuz" spaceships. The expedition, rumors claimed, failed because of the death of a spouse in 1965 in a car crash.

In 1976, NASA announced the recruitment of new crew members for their space shuttles. Of more than 8,000 applications 1,544 were filed by American women, six of them - along with 29 men - were enlisted as astronauts.

The Soviet Union was engaged in the space race. The first mixed space crew was launched from Baikonur on August 19, 1982 on a spaceship "Soyuz T-5". It included Commander Leonid Popov, Flight Engineer Alexander Serebrov and cosmonaut-researcher Svetlana Savitskaya. On the space station "Salyut-7", the pride of the Soviet space industry, the 2nd expedition was expected by the crew of Anatoly Berezovy and Valentin Lebedev.

A week later, the trio safely returned to Earth, and on 27 September, 1982 German magazine Der Spiegel wrote: "Sex is the only reason the female cosmonaut visited her two colleagues." The source of this dishonest statement was NASA doctor named Dick Richards, who supposedly knew all the ins and outs of the Soviet expedition. He was the one to say: "The Russians want to research how a baby conceived in zero gravity develops."

There were some grounds for such statements. Soviet experiments on reproduction in rats during space flight were carried out. However, the female rat not only failed to produce viable offspring, but soon died. Research conducted by a team of space medicine in Kansas City showed that the process of reproduction of living beings in weightless conditions changes. During several missions experiments with the sperm and the eggs of sea urchins were conducted. In weightlessness, the mobility of sperm cells increased, and after placing the container in a centrifuge that simulates the increased force of gravity it decreased again.

In fact, this expedition brought a lot of anxiety to the commander of the orbital station "Salyut" Berezovy, because he believed that a woman onboard a spaceship brings misfortune. In a letter to his wife, Berezovy complained that the presence of Savitskaya can complicate life aboard the station. The first woman astronaut Savitskaya traveled to space in July of 1984, and gave birth to a healthy baby in November 1986. However, this fact did not have anything to do with her "space odyssey".

In the USSR sex did not exist in space either. However, along with Soviet women cosmonauts, there were also U.S. female astronauts in the history of exploration of the universe. Before the start of the new millennium, some 40 women astronauts circled the Earth, and some of them were in orbit for two weeks.

In June of 1983, Sally Ride has completed a flight on the space shuttle Challenger and became the first female American in space. Her colleagues, as in the case of Savitskaya, were four men: Robert Crippen, Frederick Hauck, John Fabian, and Norman Thagard. As is the case with the Soviet female astronaut, there were rumors about certain relationships that have been officially denied by both the astronauts and NASA's leadership.

According to the most common legend, the first sexual intercourse in space took place on September 3, 1984 during the Discovery flight between Judith Resnik and Richard Mullane who had been neither lovers nor spouses. Jan Davis and Mark Lee who in 1992 flew on the shuttle Endeavour were married to each other. However, they got married shortly before the start, and NASA did not have time to make a replacement. To reduce the contact between them, they were assigned work in different 12-hour shifts. However, the accident with the "Challenger" in January of 1986 and the death of the crew that included Judith Resnik, seemed to have closed the discussion on "sex and the cosmos" for a long time.

The attention of the Western media has focused on the Russian space station "Mir". In May of 1991, the first Englishwoman astronaut Helen Sharman was stationed on the spaceship. 28-year-old Helen, a chemist by training, was restraint and concentrated solely on her work. At a banquet table at the station "Mir" she was spotted in a pink chiffon dress that she wore over a tracksuit. Some observers mistook the young woman's dress for a negligee and then unanimously stated that this would have been unimaginable at NASA.

On October 4, 1994 on "Soyuz TM-20" Russians Alexander Viktorenko and Elena Kondakova were joined in space by a German Ulf Merbold who had already been in orbit twice as part of the crews of American shuttles. German journalist Horst Hoffman who specialized in coverage of space subjects wrote that during the joint space mission, Ulf Merbold developed warm feelings for the elegant Russian."

At a press conference held immediately after their return from the orbit, Kondakova talked to journalists on the issue of sex in space: "The environment, including weightlessness, does not make any difference for sex, but I think there must be one very important condition - you have to love your partner."

The media reported about the tight "trousers" "Chibis" that create a negative pressure on the lower part of the body, activating blood circulation. Russian cosmonauts have to wear "Chibis" at the final stage of flight. For three weeks they "stand" in a sealed fixture four times for 20 minutes, and in the final two days before the descent to Earth the sessions of "artificial gravity" increase to 55 minutes. Experts in aerospace medicine name the following side-effect: "It is better than Viagra."

Rumor has it that the first space tourist Dennis Tito, a 60-year-old American businessman, after the return from his extraordinary voyage was praised by his young girlfriend Dawn Abraham. She admitted to Russian experts that it was the best night of love in her life, directly alluding to the improved abilities of her boyfriend.

The only creatures whose sexual experiments were observed in weightlessness were rats. Humans, even if they had those, did it out of love and not on the order of scientists.