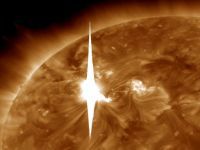 According to astronomers, it's the biggest phenomenon to hit the Earth in the last five years and may also impair GPS systems

The largest solar flare in the last five years is coming to Earth, and it could wrap the planet in a wave of particles that can cause problems for power grids, GPS systems and airplane flights.

The event started on the Sun on Tuesday night (6th), and its effects were due to arrive between 23h on Wednesday and Thursday 3am (GMT), according technicians of the Space Meteorology Center, the United States. They claim that the explosion is increasing in size as it moves away from the celestial body.

"It will hit us right in the nose," said Joe Kunches, a scientist at National Oceanic and Atmospheric Administration of the United States (its acronym in English, NOAA). It should last until Friday morning (9th), but the region where the solar storm came from can still send new explosive flares. According Kunches, another group of active sunspots are ready to explode in our direction after this storm.

But for now, scientists are hoping to see what will happen on Thursday, when the electrical particles reach the Earth at a speed of 6.4 million kilometers per hour.

For the next 14 months the sun will be the angriest it's been since 1859. The massive storms electrify the geomagnetic field, affect the Arctic vortex, and warps and twists the jetstream creating gigantic vortexes sweeping across the defenseless Midwest.

Normal tornadoes become super-tornadoes that are super-destructive and much more numerous. What could be in store for North America? Tiny towns scraped off the map...major cities in ruins by the merciless hands of Nature gone mad