People in the cage of a lion

Argentina Zoo sparked controversy by allowing entry into cages of tigers and lions... 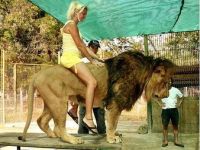 "God created the cat so that humanity can have the pleasure of caressing the tiger." The phrase, attributed to the French vet, Fernand Mery, sums up the attraction for and fear of big cats like jaguars, lions and tigers, and the effect they have on the human imagination.

But in Argentina, one does not have to contend with the Persians, Siamese or a mutt. In Lujan Zoo, which is 70 kilometers from Buenos Aires, visitors can enter their cages to love, give milk and take pictures as if they were nothing more than big cats. It is also possible to feed and interact with elephants and bears.

The zoo is a success. Who wouldn't want to have a baby lion on their lap, play with and give milk to an adult tiger up close or see a grizzly bear without risk?

In video sites like Youtube, a lot of excited visitors can be seen in apparent peaceful coexistence with different wild animals. In 2009, in pictures published in some media outlets worldwide, a woman appears sitting on the back of a lion.

The controversial Lujan Zoo has existed since 1994. Its initial collection was a monkey, two donkeys, two ponies, some llamas and deer, a pair of lions and some peacocks, which were part of the personal collection of owner, Jorge Alberto Semino. Over time, Semino added new specimens, many from donations, exchanges and purchases from livestock farmers, especially birds such as blackbirds and parrots.

Today, in an area of ​​15 hectares, there are sheltered cages and wooded areas, where visitors can even spend the day and barbecue, as well as interact with the animals.

The group of African lions is the most important among the cats of the zoo, with over 80 animals. There are also 20 Bengal tigers and 12 jaguars. There are about 50 different species of South American monkeys, as well as a pair of elephants... 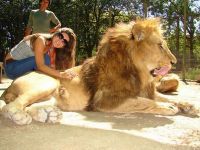 On their website, the Lujan Zoo says that when they purchase animals, they prefer to call it a rescue. They happen to be saving the animals from the deplorable conditions in which they often live, mainly in circuses.

Despite the conscious discourse, Lujan is a controversial place. Their policy of allowing visitors to touch the animals makes one more aware and wonder if it is possible - if not desirable - to tame predatory species such as lions, tigers and bears, without sedatives, and put them in direct contact with the public so that neither they nor the visitors take risks.

"I only have one word to describe the Lujan Zoo: 'shame,'" said Carlos Fernandez Balboa, to iG, responsible for the environmental education of the Wildlife Foundation of Buenos Aires. For Balboa, the animals pose a risk to visitors and inexperienced caregivers.

"A tiger having a 'bad day', as anyone can have, can turn the tide for visitors," he says. "But this 'bad day' is minimized by the evident and surprising situation of all beasts, that are drugged, doped or with a low level of drug that turns them into obvious stuffed animals."

The director of the zoo vehemently denies using drugs. In a letter responding to allegations about the sedation of the animals that was posted on the Internet, the owner, Jorge Semino, says the zoo is open to anyone who wants to check on his methods and, that in 18 years of operation, no accidents have been registered in Lujan.

In the zoo's script, a guide also says that sedated animals tend to be more dangerous than others because they feel dizzy and uncomfortable. In an interview with iG, Semino, coordinator of the zoo, says keepers are in contact with the animals from when they are born and read their reactions and moods. "This prevents accidents," he says. "And if anything happens, the responsibility is ours, like any other business establishment."

Cages are accessible to everyone who pays the fee and signs a paper saying that if you are eaten, the Zoo is not responsible.

In a institutional video, the creator of the place appears playing with and caring for lions in their cages in the room of a house. He says the cats at the zoo are all born and bred in captivity, from when they are small, and lose their predator instincts and competitiveness.

"We have taken care of them since the day they are born, and we're part of their family since they are babies," he explains. The cats are raised with dogs and treated as such - to the point, according to the video, where they are taken for a walk in large collars by their handlers. Thus, animals become meek, quiet and able to maintain contact with humans.

Loophole / Breach in the law

Still, for Argentinian environmentalists, the Lujan Zoo would be closed if it were not for commercial and political reasons. It would be really difficult for a small and remote zoo to compete with the one in the larger region, such as the Buenos Aires Zoo and the Temaiken, except for the fact of allowing the touching of animals.

They accuse the zoo of failing to meet state law 2308, 2001, in the province of Buenos Aires, which prohibits contact of humans with wild or dangerous animals, holding establishments responsible for the safety of the public and its employees. In another article, the decree says that in each cage there should be information signs about the animals, and that the zoos should complement that with educational activity.

But Lujan Zoo claims that their animals are born in captivity, domesticated and tame, and therefore cannot be considered wild and dangerous. "We're not an illegal zoo. The government makes regular inspections, the controls are very strict. We are totally in agreement with the Ministry of Environment. The zoo has been open since 1994 and has never been closed. It would be impossible to be different," explained Semino to iG.

But can you really compare Lujan Zoo with the wildlife parks in Australia and Africa, for example, where there is contact with animals that are loose in reproductions of their habitat and not domesticated?

"The Lujan Zoo creates a fictitious image of the nature of animals and has no educational value. It's just a big business that violates the rights of animals," says Enrique Vidal, president of the Argentine Association of Environmental Lawyers. "I'm not against the demonstration of the goodness of animals in captivity, as it also improves the management of these conditions. But someone entering a cage with a lion? Where is the image of respect to a species that is a natural predator? What message does that give?" says Balboa, from the Wildlife Foundation.

The direction of this place, on the other hand, suggests it's too expensive to keep a zoo like this, and they do not have any kind of extra investment and therefore you cannot even reproduce the natural habitat of the animals.

"We do not have to justify what we do. We give the possibility for humans to have a relationship with animals. This kind of practice is very young. It began to be studied in the 1950s, and shows that some species may have modified their behavior. These animals are born in captivity and cannot get back to nature, they have lost their instincts.

There are two possibilities: that they are inside the cages and the visitors on the outside, or that people come in, take photos, videos and get to know them very well," says Semino.