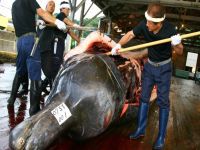 Given the increased hunting of whales in the world, U.S. scientists have proposed a controversial solution: the creation of a market for whales. According to the proposal published in an article in the journal Nature, a quota for the killing of whales would be established, as well as that which could be bought and sold.

In this market, according to the authors, it would be possible to reduce mortality without having to create a battle between conservationists and whalers.

"We propose an alternative path to this impasse: quotas of what can be bought and sold, creating a market that is economic, ecological and socially viable for whalers and conservationists," the authors write.

In the article entitled, "A market proposal to save the whales," the professors Christopher Costello and Steve Gaines, from the economics and marine science department at the University of California, and biologist and conservationist Leah Gerber, University of Arizona, propose a market solution to reduce the hunting of whales.

According to the researchers, despite all the efforts of conservationists and the moratorium established in 1986, the number of whales captured has more than doubled since the early 1990s. Today there are about 2,000 whales killed each year.

The idea is based on markets for air pollutant gases, which monetizes the ravages of pollution and invests in conservation areas, and also the policies of individual transferable quotas that have been used for fishing in Iceland, New Zealand and Canada. In this quota system, regarded as sustainable, fishing is divided between fishermen in these countries.

The authors state in the article that environmental organizations like Greenpeace, Sea Shepherd and WWF, annually spend about 25 million U.S. dollars in the fight against whaling. The authors suggest that this amount could be used to purchase shares. According to the market value, and the proposal of the researchers, minke whales would be worth $13,000 and $85,000 for fin whales.

According to a biologist at Greenpeace, Leandra Goncalves, the proposal presented in the scientific journal makes no sense. "It makes no sense, this is not the role of environmental organizations. Biodiversity must be preserved, not for market value, but the value they have in nature," she said.

According to the proposed market of whales, conservationists could offer shares and whalers could profit from them. The authors propose a model where, they say, everyone would be rewarded. The number of whales hunted would depend on who owned the 'title.'

If the whalers acquire all the shares, the maximum number of whales hunted would be previously stipulated. If all shares were acquired by conservationists, all the whales would be protected and the whalers would be rewarded with money from stocks.

She refutes the pricing of whales, and compares the two economic activities related to the animals. "While whale hunting generates $30 million per year, observation tourism moves 2 billion dollars a year. That's what you need to think about."