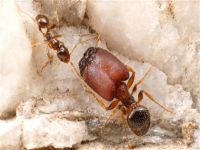 Although all of the ants in the genus Pheidole have genetic material to develop into super soldiers, the caste is rare in nature

The super soldier ant with a huge head that blocks the entry into nests and fights like no other is rare. Only two species are capable of developing naturally. However, researchers found that all ants of the genus Pheidole have the genetic material necessary for the superants to develop. The study showed the existence of a common ancestor for all species of Pheidole which ensures that gene.

Apparently, these super soldier ants are throwbacks to an ancestral state, one that no longer shows up within their species except, apparently, by accident. This phenomenon occasionally pops up elsewhere, like whales bearing limbs their ancestors lost, chickens with teeth or humans with tails.

To understand why the superants are so rare, researchers combined analysis of field studies, hormonal manipulation, gene expression analysis and the phylogenetic tree of dinosaurs and birds that shows the evolutionary relationships among species with a common ancestor.

Larvae are placed in an equal way by the queen, but environmental factors determine what kind of caste is born. "When the queen lays the egg, depending on the temperature, a queen is born, if not a worker. And if proper nutrition is received, it can develop into a soldier or a worker," said Ehab Abouheif at McGill University in Canada, author of a study published in the journal Science.

The researchers also found that the development of super soldiers can be induced in one of these species - Pheidole morrisi, by using methoprene juvenile (growth / youth) hormone in larvae. According to the researchers, this indicates that environmental stimuli can activate the genes of super soldiers.

Most ant species of the genus Pheidole have two types of castes other than the queen: workers and soldiers. The workers do most of the tasks inside the nest, while the soldier ants cooperate together for defense. They also use their big mandibles to crack seeds harvested by the minor workers. This genus of ants is the most numerous in species, with about 1,100 species worldwide.

Translated from the Portuguese version and apprnded by: