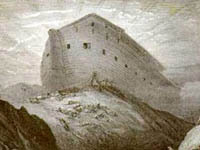 Reports about the traces of the legendary Noah's Ark appear in the media on a regular basis. The majority of such messages say that there is a mysterious object resting on top of Ararat Mount. The object could be the ancient vessel, on which Noah rescued animals from the Great Flood.

Here is what the Bible says about the events, which took place in 2500 BC: "So God said to Noah, "I am going to put an end to all people, for the earth is filled with violence because of them. I am surely going to destroy both them and the earth. Make yourself an ark of gopher wood. Make rooms in the ark, and cover it inside and out with pitch. This is how you are to make it: the length of the ark 300 cubits, its breadth 50 cubits, and its height 30 cubits. For behold, I will bring a flood of waters upon the earth to destroy all flesh in which is the breath of life under heaven. Everything that is on the earth shall die. But I will establish my covenant with you, and you shall come into the ark, you, your sons, your wife, and your sons' wives with you. And of every living thing of all flesh, you shall bring two of every sort into the ark to keep them alive with you. They shall be male and female."

As the Great Flood began, the boat was going higher and higher above the earth until it reached the top of the highest mountain. The flood continued for 40 days and 40 nights and then stopped. The boat continued to rest on top of Ararat Mount.

Also read: Noah's Ark made its final stop in Iran

Many people have tried to find the remnants of Noah's Ark on the mountain since then. However, the Bible says that the boat stopped on Mountains of Ararat, not Mount Ararat. Experts believe that it goes about Urartu Mountains in eastern Turkey.

In 1960, Lihan Durupinar, a captain of the Turkish army, made several aerial photos. On one of those photos, Durupinar saw a strange object staying at the height of 6,350 feet in Ararat Mountains. The object was shaped as a ship and was nearly 500 feet long. A mission of US and Turkish scientists set off on a mission to the mountains soon after the photo had been published.

At the height of nearly 7,000 feet above the sea level, they saw a flat plot of land covered with grass. The plot looked like a ship indeed. The size of the plot of land was very close to that mentioned in the Bible. The scientists did not conduct a detailed examination of the site. They simply concluded that the strange formation was nothing else but a natural phenomenon.

In September 1960, a 27-year-old US doctor Ron Wyatt, an amateur archeologist, read an article in Life Magazine about the phenomenon. The search for Noah's Ark became the primary objective in his life.

In 1977, Wyatt started the mission to Turkey with his two sons. Having overcome numerous difficulties, the US researcher and his sons reached the village, where they found conductors among the local population. On the outskirts of the village, the men found several boulders, which looked like anchor rocks. Ron had seen the photos of those rocks in archeology books before. The rocks with holes drilled in them served as anchors for ancient vessels. It turned out that there were crosses engraved on all local rocks.

Some time later, Ron found the object that looked like a ship. The object was submerged deep into the ground. The men had to conduct excavation works to find out whether there was the legendary ship hidden in the ground.

In August 1979, after the Turkish earthquake, Ron Wyatt visited the site again. The researcher discovered that the ground bared the fossilized remains of the vessel. Wyatt had not received a permit for the archeological works by that time, so he decided to work on his own. Next time, he used metal finders in his work. It happened in August 1984.

The scanning revealed a metal network around the object. The network was supposedly of artificial origin. Ron explored the slope of the mountain where the "Ark" was resting. Up in the mountain, he discovered the ruins of an ancient stone construction. There was a plot of land near the ruins measured 120x40 feet. The plot was framed with something like fossilized wood.

In December 1986, Turkish officials representing interior and foreign ministries, as well as a group of researchers from the city of Ataturk approved the official solution saying that the formation discovered by Ron Wyatt and his colleagues contained the remains of Noah's Ark indeed.

Many discussions have taken place since the "official" discovery of Noah's Ark. Some scientists say that Wyatt indeed discovered the Biblical vessel, whereas others deny this theory. The search for the Ark still continues.