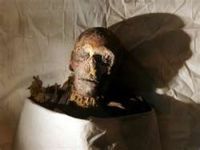 Groundbreaking research undertaken on three mummies in Lisbon's National Archaeological Museum in Belém, Lisbon, has revealed the first known case of prostate cancer in an Egyptian mummy. The discovery was made by the three entities participating in the Lisbon Mummy Project - MNA, IMI and Siemens.

The study was performed using 64-cut multicut CAT-scan and Digital X-Ray technology using Siemens systems at the premises of IMI in Lisbon. The subjects under investigation were two closed sarcophagi from the third to first centuries BC and the ninth to eighth centuries BC and a bound/embalmed Ptolomaic mummy (305 to 30 BC). The results have just been divulged.

The 3D images of the sarcophagi have revealed some breath-taking information which has enchanted scientists working in such diverse areas as archaeology, anthropology, physical anthropology, paleopathology and history. Cancer of the prostate with ramifications was discovered in one of the mummies, while in another, the tests revealed a lesion resulting from a pulled muscle or sprain. 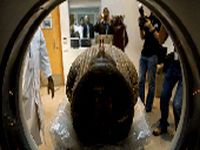 According to the specialists working in the Project, this is the first case of prostate cancer discovered in an embalmed Egyptian mummy and probably the second oldest case (2300 years) found to date (the oldest is thought to be a skeleton from Siberia, dating from 2700 years ago).