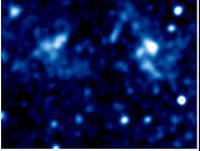 A group of astrophysicists from Leicester University of Amsterdam developed a model that explains the nature of the activity of compact radio source located at the center of our galaxy and named Sagittarius A* because of its proximity to the Sagittarius constellation. They believe that the main cause is the destruction of the planets and asteroids under the influence of gravity.

The object was discovered in 1960 by J. Oort and H. Rogur less than 0.03 degrees from the center of the Milky Way. The researchers found that, except for the radio band, it also radiates in the infrared, X-ray and other ranges. However, at the time they were unable to conduct detailed studies of the galactic nucleus because of the dense clouds of cosmic dust that absorb visible light. Only in the early 1970s, when the equipment operating at infrared wavelengths became available, it became apparent that the object consists of two diffuse clouds at a distance of one degree from one another. It was discovered that the eastern cloud (Sagittarius A) emits a radio frequency of non-thermal nature, and Western (Sagittarius A*) - hot ionized gas.

Observations subsequently carried out by an international research group at Max Planck Institute have revealed that the mass of the object is approximately 4x106 more than that of the Sun, while its radius is no more than 6.25 light-hours, or 45 astronomical units.

Over time, scientists have concluded that the object is nothing more than a supermassive black hole surrounded by a cloud of radio-emitting hot gas. However, the hole is mostly at rest and, unlike other known active galactic nuclei, has low bolometric luminosity (luminosity that takes into account all ranges of wavelengths).

However, in theory, from time to time the "silence" of the black hole must be interrupted by a powerful flash when gravity of Sagittarius A* grabs one of the nearby stars. As a result of this "capture" part of the stellar matter falls onto the black hole, and part is ejected into space in the form of protons, which, in turn, cause the particles of dust and gas around the black hole to emit streams of high-energy electrons. The latter, in turn, emit photons in the radio and X-ray bands. These processes occur in other galaxies approximately once a millennium and continue for several months.

But for Sagittarius A* the interval between large outbursts is approximately 100 thousand years, although weaker emissions in the infrared and X-ray spectral regions that lead to an increase in luminosity by 3-100 times can be recorded daily. Normally the duration of these mini-flares does not exceed several hours.

Researchers from Leicester University of Amsterdam operated under the assumption that supermassive black holes are surrounded by enormous toroid cloud consisting of asteroids and planets that interact with each other and change their orbits, regularly getting into the zone of influence of gravity hole. The radius of this "danger zone" is approximately one astronomical unit.

Meanwhile, for a flash to be visible, its luminosity in the X-ray and near-infrared should be ~ 1034 erg per second. The total energy of the flash released in a standard duration of 104 seconds reaches 1038 erg. This amount of energy is released during the destruction of an asteroid the size of ~ 10 km that approaches Sagittarius A* at a distance of one astronomical unit.

The brightest flash is produced during the destruction of the object with a diameter of 45 kilometers. Because the objects of this size in the main asteroid belt of the Solar system come across quite often, the model of British and Dutch astrophysicists look plausible. The calculated frequency of the flashes and its dependence on luminosity also agrees with previous experimental data.

If the model is correct, it may provide an explanation for a relatively strong X-ray flare that occurred some 300 years ago. Then the X-ray luminosity of Sagittarius A* was greater than 1039 erg per second. However, according to astrophysicists, the culprit for this was not an asteroid but a much larger planet - a gas giant similar to Jupiter.