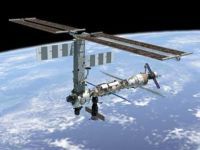 Russia prepares to resume flights to the Space Station

A Russian cargo ship is ready to take off on Sunday toward the International Space Station, in the wake of an accident at a launch in August that forced a cut in personnel aboard the orbital station.

The Progress cargo ship, scheduled to take off at 9:11 (GMT) from Baikonur Cosmodrome in Kazakhstan, will be the first flight to the station since a failure in an upper stage rocket of an unmanned cargo ship August 24.

The engine that failed is almost identical to those used aboard the Russian Soyuz rocket, carrying astronauts and cosmonauts to the station, a project of $100 billion from 16 nations currently orbiting about 385 miles from Earth.

"The Russians said they had detected the cause of the accident as possible debris and clogging the fuel supply line," said Kelly Humphries, a NASA spokesman. "They did additional inspections and tests, on which we were told are done to make sure we're ready to go."

Since the shuttles were retired in mid-year, Soyuz capsules are the only ships capable of sending teams to the station, a service that NASA estimates costs $350 million per year.

The flights were suspended after the accident, leaving a team of three members aboard the station for an extended period.

"Things happen during launch. They are very dramatic and attract everyone's attention," said astronaut and director of operations for NASA, Mark Polansky, to Reuters in Russia.

With the anticipated success of Sunday's launch, the Russian Space Agency Roscosmos confirmed the list of next crew members who will fly to the International Space Station (ISS) on Nov. 14. Russia's Soyuz TMA-22 spacecraft will bring Russian cosmonauts Anton Shkaplerov and Anatoly Ivanishin and American astronaut Daniel Burbank to the ISS for a 124-day-long mission. Russia's Gennady Padalka and Sergei Revin and American Josef Akaba are to be the backup crew.

If the launch fails, the station will probably be left without crew until the return of a crew next month. The station has never been uninhabited since the arrival of the first team on November 2, 2000.

To make room for new cargo arriving, which must be coupled on Wednesday, the crew filled a Progress capsule full of old junk and items no longer needed. The new load consists of 2.8 tons of food, fuel and supplies, including a pair of iPads.

NASA seeks $850 million this year to help US-based private companies to develop space taxis, in order to break Russia's monopoly on flights to the station before the end of 2016.