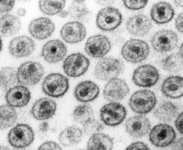 The infamous AIDS can be now treated with gene therapy. Patients are administered modified cells of their own immune system, which makes T-lymphocytes immune to the action of the immunodeficiency virus. This method has already been tested on three human volunteers, and the results were positive. Nevertheless, doubts still remain.

The victory over AIDS was publicly declared more than once, but re-encoding of immune cells with HIV is a relatively new way to fix immunity. According to WebMD, the research was conducted by a team led by Ronald T. Mitsuyasu with the University of California at Los Angeles. The researchers spoke about their experiments and the results obtained at the Interdisciplinary Conference on Antimicrobial Agents and Chemotherapy.

At this point the primary method used in the treatment of patients with human immunodeficiency virus is the so-called highly active antiretroviral therapy (HAART), which involves the use of several drugs that suppress the activity of the virus in the body and its natural mutation. In this form, resistant to the virus strains are formed in the drugs, which greatly complicates the selection of drugs for highly active antiretroviral therapy.

The main way to deal with AIDS is prevention, and not the treatment of already acquired immunodeficiency. There are regular reports on the found panacea, but HAART is the only truly mass-scale one. It reduces the viral load in blood to undetectable levels, but does not eliminate the virus, which can be not only in the blood but also in lymph nodes, as well as in other human organs. In addition, antiretroviral therapy is expensive and is available not to all patients. The annual course of treatment in Russia will cost from 70 to 250 thousand rubles. Often therapy takes more than a year.

The new treatment offered by the Americans is based on the removal of CCR5 gene from T- lymphocytes of the patients. It is this gene that encodes a receptor through which the pathogen enters the cell. After the removal of the gene the patient is administered the cells from her own modified immune system. During the modification nearly a third of T-lymphocytes obtain a double copy of the mutant gene CCR5, which makes them almost invulnerable to HIV.

It is reported that 15 patients participated in two studies. They were observed for a year after the introduction of modified T-lymphocytes. All participants registered a steady increase in the number of T-lymphocytes per volume unit of blood. In addition, three volunteers decreased the viral load (number of agents in the blood), and one virus has ceased to register in laboratory tests.

On the basis of experiments, scientists have made a preliminary determination on the safety of the method. Perhaps it can be used in conjunction with antiretroviral therapy. After completing a course of viral load reduction, the number of eigenvalues ​​of T-lymphocytes is increased and they can be taken for genetic modification and the subsequent infusion to the patient. Meanwhile, some scholars believe that AIDS is not an infection, and its pharmacological treatment is a hoax. Scholars who stick to this view are called AIDS dissidents.

Most of them said that the syndrome of acquired immunodeficiency actually takes place. However, it is not caused by some specific virus. They conclude that its presence is primarily dependent on the number of antibodies in the blood.  The cause of AIDS may be very different: different effects on the body of drugs, radiation, and a number of diseases, stress, and even poor nutrition. At the same time a positive reaction to HIV can provoke tuberculosis, hepatitis, pneumonia, rheumatism, influenza all the diseases that lead to an increase in the number of antibodies in the blood.

Interestingly, the AIDS dissidents are not convinced by even photographs of the virus made using transmission electron microscope. They believe that the virus and AIDS as a disease are different things.

Perhaps, the dispute of the "believers" and "non-believers" over the fact that HIV can bring about "the plague of the twentieth century" will be solved by a detailed computer model of the behavior of the virus that several laboratories are currently working at. Now we only hope that the new treatment proposed by the Americans will be effective and not cause side effects even more terrible than the disease itself.