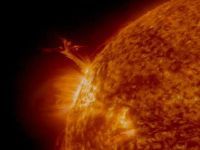 Together with data from NASA spacecraft, researchers can understand the evolution of solar storms

The solar observations from SOHO and STEREO missions of NASA (the U.S. space agency) revealed new data that will help facilitate climate forecasting on Earth and to better understand the evolution of solar storms that can damage satellites and cause communications errors.

Scientists at Stanford University (California) designed a new method to detect so-called "coronal mass ejections" (CMEs, the acronym in English) that cause the northern aurora borealis and interruptions in communications.

.According to the study published in the specialized journal Science, these solar eruptions emerge from the interior of the Sun as strong magnetic fields, exploding toward the surface and forming an enormous bubble of magnetic plasma, which causes a wave that expands into the solar system.

Its existence is documented, but scientists are still searching for a way to detect them before they form and thus avoid their consequences, especially for communications. These ejections are also dangerous to cosmonauts in space, and may cause electrical blackouts on Earth.

Using the observations with the Solar and Heliospheric Observatory, SOHO, a joint mission of NASA and European Space Agency (ESA, the acronym in English), Professor Stathis Ilonidis and his team were able to detect signs of the formation of sunspots emerging before they reach the surface of the Sun

The scientists found that the magnetic fields that form sunspots are generated at least 65,000 kilometers below the surface and calculated the speed at which they emerge, so they could establish a relationship in advance.

The study indicates that magnetic fields emerge from 0.3 to 0.6 kilometers per second and cause sunspots one or two days after being initially detected.

NASA also presented new images provided by the twin STEREO spacecraft, launched in 2006 to improve the ability to predict solar storms, which clearly "provides the capacities of observation to establish models to carry out better predictions," said Lika Guhathakurtaat at a news conference for the scientific program.