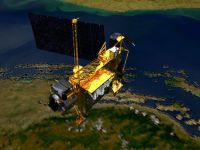 The Upper Atmosphere Research Satellite (UARS, its acronym in English) entered the atmosphere and fell to Earth, NASA confirmed on Saturday. The NASA space agency) has confirmed the information but said it is not possible to specify the time and place of the fall.

According to NASA, the UARS penetrated the terrestrial atmosphere between 0h23 and 2:09 a.m. (GMT) somewhere in the North Pacific Ocean. This does not necessarily mean that all parts of the satellite fell into the water. Calculations by NASA, indicate the remains can spread to a radius of 800 kilometers from the point of impact.

There are reports that parts of the satellite fell into the town of Okotoks, in western Canada, but the information has not been officially confirmed. NASA also said it had no records of casualties or damage caused by the fall of UARS.

According to the U.S. space agency, the odds of the satellite falling on North America were small and there was no precise information on other continents, although the Russian space agency has said on Wednesday (21st) that the debris would fall into the sea near Papua, New Guinea.

The probability of some of the UARS remains striking someone was one in 3200, NASA said. For comparison, it is estimated that the risk of a person living to 80 years to be struck by lightning is 1 in 10,000. The device weighs 5.675 tons and is the size of a bus.

The initial forecast was that the satellite would fall in late September or early October, but his fall was anticipated by the strong increase in solar activity last week. But the solar wind slowed in the last hour, which slowed the fall of UARS.

NASA scientists estimated that the satellite would fall apart upon entering the atmosphere and that at least 26 large pieces would survive the high temperatures of reentry and fall on the Earth's surface.

The satellite was flying over much of the planet between 57 degrees north and 57 degrees south of the equator. It was placed in orbit by the space shuttle Discovery in 1991 to study ozone and other chemicals in the Earth's atmosphere. It completed its mission in 2005 and has since been slowly losing altitude, pulled by gravity.

According to Jonathan McDowell, Center for Astrophysics Harvard-Smithsonian, USA, pieces of rockets and satellites fall back to Earth every year, without any damage. He noted that this year alone two great pieces of Russian rockets have fallen on Earth, without major repercussions. The chances of it hitting someone are very small. "I would not worry," he said. There is no record of pieces of space junk hurting people or damaging property.

In 1991, when the UARS was launched, NASA was not concerned with the fate of satellites when they were disabled. Currently, all equipment for space is designed to burn up completely in atmospheric reentry or have enough fuel to be operated safely back to Earth or in outer space. This includes the International Space Station, which must be cleared by 2020.

Even the old Russian Mir station fell safely in the Pacific in 2001. But its predecessor, Salyut 7, fell out of control in 1991. The last satellite return without any kind of maneuver was one of NASA's in 2002.

The most famous case of one falling without control was the experimental station Skylab in 1979, from NASA, which generated thousands of bets on where it would fall, either to fall in the Indian Ocean or in remote parts of Australia.